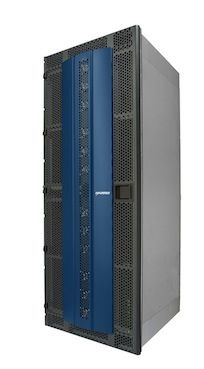 The Platinum IP3 can scale to multi-frame configurations for very large broadcast and media operations using a common architecture, according to the company, simplifying installations and eliminating costs associated with external components and complex cabling. The intelligent architecture maximizes on-air security, with an approach to audio, video and multiviewer signal protection based on redundant crosspoints and integrated routing designs.

The triple-path architecture of the Platinum IP3 retains the ability to cleanly separate video and audio signals while becoming the first broadcast router to offer a true path to network convergence.

"Offering a future-proof design that looks beyond baseband/IP convergence to cover ultra-high-bandwidth needs, including 4K and beyond, gives our customers a unique opportunity to prepare for approaching changes," said Harris Morris, president, Harris Broadcast. "But the ability for our customers to intelligently scale routing systems to any size using a common architecture, along with the best possible on-air protection, delivers real-world benefits that are clearly viable today."

The Platinum IP3 delivers high-quality, multi-format signal routing up to 576x1024 in a single 28RU frame. It can scale to at least 2048x2048 in multi-frame configurations without external distribution amplifiers or combiners, reducing costs and labor. The design eliminates the need to take stations off the air while scaling into multiple frame systems.

As with other Platinum routers, the Platinum IP3 accommodates multiviewers, frame synchronizers, advanced I/O options and audio mux/demux capabilities within the frame for a space- and energy-saving integrated solution. The ability to customize router size, and the integration of multiviewers and other systems, make the Platinum IP3 ideal for traditional broadcast plants as well as mobile production trucks, houses of worship, cable/IPTV facilities and large satellite TV operations, among other end users.

Systems integrators also benefit from a solution that is easy to configure and customize based on end user requirements, Harris says. An intuitive controller supports effortless setup and simplifies communications management between the router and other connected components.

"Ultimately, the Platinum IP3 breaks barriers by ensuring that customers are not dead-ended by limitations to matrix size, control options or expansion of integrated functions," said Paul Eisner, vice president of workflow, infrastructure and networking, Harris Broadcast. "This architecture gives users the freedom to protect their initial investments and build on their existing systems while also preparing them for an IP future."