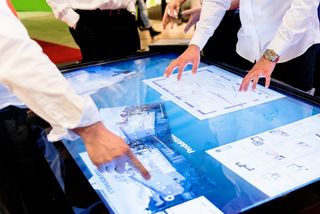 The What: Zytronic, a manufacturer of durable, customized Projected Capacitive Technology (PCT and MPCT) touch sensors, will unveil its new range of multitouch controllers during February's ISE (Integrated Systems Europe). The new controllers enable touch screens to have ultra-narrow inactive borders, enhancing video wall designs, and also facilitate the improved integration of contactless peripheral systems such as NFC payment (Stand 8-M310).The What Else: In response to the growing demand for all-glass fronted narrow touch screen borders, especially in video walls, the new touch controllers to be launched by Zytronic at ISE allow touch sensors to be designed with substantially reduced non-active borders, e.g. less than 10mm on a 55” screen, less than half of the current industry norm. The new Zytronic controllers are based around a unique and proprietary ASIC and feature a higher noise immunity, allowing technologies such as RFID, NFC and Qi wireless battery charging to be implemented adjacent to or even within the active area without impairing the normal performance of the touch screen. These technologies emit signals which can interfere with the operation of conventional projected capacitive touch screens.

The Why: Commenting Ian Crosby, sales and marketing director said, “Zytronic is setting a new standard for touch performance at ISE 2018 enhancing the capabilities of interactive video walls and touch tables. The new controllers enable a host of exciting features, allowing designers to create interfaces that are more exciting and more capable than ever before.”