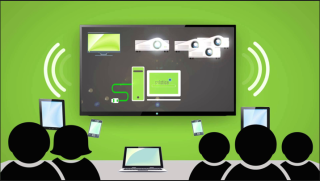 Mersive was one of the breakout stars of last year's InfoComm. With Solstice, the company's media sharing/collaboration product, attendees were given a glimpse of what a truly converged world might look like—one without wires, and one that revolves largely around software.

Mersive's Solstice 2.0 is a "customer driven release," according to founder/CTO Chris Jaynes.