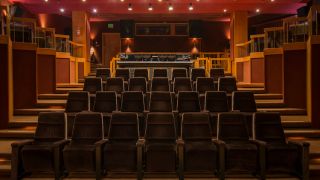 “Fantasy Film Center was constructed like a musical instrument,” said Jeffrey Wood, Fantasy Studios’ director. “The clarity and detail of the room is beautiful and it’s perfect for precision mixing. We are proud to have achieved the rebuild in an exceptional way, so that it is compatible and comparable with all of the top mix theaters.”

“The Film Center stage has solid bones acoustically, so it was a delight to upgrade the monitoring to a reference-quality Meyer Sound cinema system,” said Steve Shurtz, Meyer Sound cinema group director. “The room has a great mixing history and now a great future. Sonically, the room has never sounded better, in the league of world-class dubbing stages.”

Outside the film center One of the most esteemed full-service studios on the West Coast, Fantasy Film Center and Fantasy Studios have attracted the recording, film, television, and video game industries for decades. More than 200 films—including the Oscar-winning classics Amadeus, The English Patient, and The Right Stuff, as well as the cult classic Blue Velvet and the blockbuster Boogie Nights—were mixed onsite. The facilities have been used for post-production work on acclaimed films including Apocalypse Now, Good Will Hunting, Fellowship of the Ring, Sixth Sense, Moneyball, and many of Pixar's films, such as Finding Nemo and Toy Story. The Bay Area landmark is where platinum recordings by Green Day, Journey, Aerosmith, Creedence Clearwater Revival, Santana, and countless others have come to life.