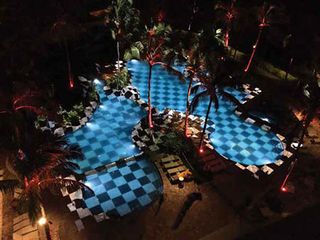 The integration of Renewed Vision’s ProVideoPlayer 2 (PVP2) software is significant as it drives playback for all seven projectors from two Mac Pro computers, saving PointCloud Media tens of thousands of dollars in comparison to expensive hardware-based packages. Additionally, PVP2 simplifies the overall workflow, allowing PointCloud Media to automate playout and quickly adjust show schedules in the event of inclement weather or special circumstances.

“Over the years, we have used many different servers to augment video projections on large buildings, and they were all very complicated to operate, requiring real experts,” said Jack Hattingh, president, PointCloud Media. “The Renewed Vision PVP2 software reliably plays out all content from a stable platform, without the expense of purchasing or renting a system and hiring a full-time operator. I can purchase PVP2 software and a Mac Pro for the price of a three-week rental of most competing products. Being a permanent installation, the return on investment with PVP2 is nearly immediate.”

The end-to-end architecture includes five rooftop Barco HDQ-2K40 40,000 lumen projectors positioned 320 feet in the air to project visual content onto the pool, along with two 20,000 lumen projectors at ground level to project visuals onto adjacent rock formations. The workflow starts with a 4000x4000 content file for the pool map and a 3840x1080 file for the rock formations. A Mac Pro running PVP2 at each location slices the 4000x4000 file into five separate 1920x1080 feeds with mild overlap. The fluid pool reflections and surrounding ambience add an element of reality to the custom 3D mapping projections.

“PVP2 allows us to fine-tune the mappings on the fly to create the best convergence between the projected images,” Hattingh said. “Its advanced rending engine, coupled with the power and reliability of the Mac Pro, enables smooth playback of the massive video file across all five outputs. PVP2 is also allowing us to create some unusual projections as we’re blending from four corners geometrically rather than top to bottom or left to right. PVP2’s flexibility has made it easy to create a unique mosaic map with plenty of light that audiences can enjoy.”

The master system on the roof is connected to the second rock projection system 31 stories below via a fiber-optic connection, with all content triggered simultaneously from both PVP2 servers. As each show begins, PVP2 triggers a contact closure relay to change the sound system from the standard background music service to the PVP2 audio feed. A third Mac Pro system outfitted with PVP2 supports a hotel broadcast on Channel 37, with viewers able to enjoy a live cut of the pool projections at the moment the light show music begins.

PointCloud Media representatives routinely monitor the system from their offices near Dallas to ensure everything is working properly, with the ability to stop, pause, restart and reschedule shows as needed. A third, holiday-themed show is now in development, given the success of the first two shows. Additionally, the simple learning curve of the system will allow hotel staff to use the system for other business opportunities as desired.

“PVP2 and the rest of system is very easy to learn and operate, so the hotel can easily use this for conferences and other themed events by the poolside,” Hattingh said. “Furthermore, they can easily gain an additional return on investment by renting the system to businesses and clients.”