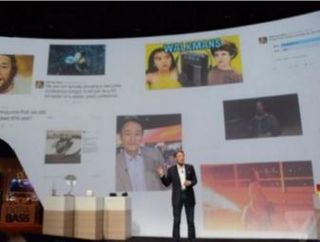 Sony executives declined to say when the technology would be available in consumer TVs.

2016 launches: Also at the show, the company unveiled its first LED light bulb with Bluetooth music streaming, a compact tabletop short-throw projector that projects video up to 80 inches from a chassis that fits in the hand, and a cylindrical glass tabletop speaker whose glass vibrates to create sound. They’re due in the summer.

Sony is also expanding its selection of 4K LCD TVs with HDR, expanding the capabilities of its wireless multiroom-audio products, and launching what is likely the industry’s first USB turntable to convert songs on vinyl to high-res music files.

In other 4K developments, Sony Electronics president/COO Mike Fasulo announced that Sony plans a spring launch of a premium 4K streaming service that will deliver Sony Pictures 4K movies in HDR to the company’s Android TVs. It will also allow viewing of a user’s purchased UltraViolet movies and TV shows.

As for 4K Blu-ray player plans, Sony president/CEO Kazuo Hirai told TWICE that Sony will launch a model if the physical format takes off despite the popularity of streaming services.

He also said the company hasn’t decided whether to seek UHD Alliance certification for any of its new 4K TVs launched at CES.

TVs: In TVs, the company is bringing Open HDR technology to seven new 4K models, having offered two 4K TVs in its 2015 lineup with HDR-upgrade capability. All run Google’s Android TV OS, adopted by Sony for the first time in 2015.

Starting in 2016, Sony 4K TVs that take full advantage of HDR content will be branded with a new “4K HDR Ultra HD” logo, which will be used across HDR-compatible Sony products from filming to display devices and services.

The TVs also feature Android TV’s ability to control home automation systems. Via the TV’s UI, consumers can control a Logitech Harmony Hub along with hub-connected home entertainment products and IoT devices such as lights.

At the top of the line, the XBR-X930D and XBR-940D models sport an ultra-thin design with a bezel so narrow that, “when hung against a wall, the television is so close, and the bezel is so thin, that it can appear to be flush with the wall,” Sony said.

Also in wireless, Sony is launching its first two Blu-ray players that integrate with its wireless multiroom-audio network to stream music from CDs or USB sticks to wireless-multiroom speakers, soundbars, and AVRs in other rooms.

The two new wireless speakers are the SRS-ZR7 and smaller SRS-ZR5. The former features high-res music playback. Both are the company’s first multiroom speakers with HDMI ARC port to connect to TVs to amplify TV sound. The ZR5 also features Bluetooth, NFC, and proprietary LDAC technology to stream high-res music over Bluetooth with near-high-res quality thanks to a maximum 990kbps transfer rate, which is triple that of conventional Bluetooth audio.

Both feature Wi-Fi and PlayStation Now, which enables the players to stream select PlayStation 3 games from the cloud and play them on a TV via Dualshock 4 wireless controller.

High-res USB turntable: The HX500, due in the spring, features built-in A/D converter to convert vinyl music to high-res native DSD (up to 5.6MHz) or WAV files (up to 192 KHz/24-bit) formats for playback on high-res portables, music servers, and other products.