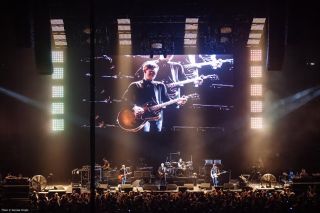 Normandale specified the screen because the band - who have been judicious in their approach to integrating video into their live shows – this time around wanted a massive upstage LED screen.

Having seen a plethora of big screens over the years, he was keen to use a product that would bring a proper three dimensionality to the stage and really stand out from the minefield of LED surfaces available.The 2:1 aspect ratio of the screen is to enhance the cinematic feel of the performance space.

He received a demo of the MC-18 Hybrid from XL’s Project Manager Phil Mercer in the UK, and then went ahead and added it to his spec.

XL’s camera package consists of three operated Sony HXC-100 HD cameras, one positioned at FOH, one in the pit and one hand-held onstage, plus a four-way Bradley Cam-Ball 2 robo cam system with units dotted around the stage.

All these feeds go into Woodhead’s GV Karrera PPU / vision mixer – one of XL’s new systems - and are output to the screen from there. A Catalyst media server feeds the playback content to screen, operated by Anthony Cairns.