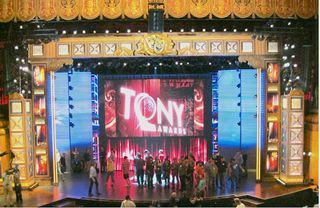 “If only real life could be more like theater,” joked host Neil Patrick Harris as he opened the 66th annual Tony Awards at New York City’s historic Beacon Theater. In order to bring Broadway’s memories over the past year to life, Red Hook, New York-based Firehouse Productions relied on HARMAN’s JBL VERTEC line arrays and Crown amplifiers for the live sound reinforcement system.

This years’ awards show featured performances from some of the top theatrical productions of the year, including The Gershwins’ Porgy and Bess, Jesus Christ Superstar, Follies, Once and more.

“The hardest part of the project was finding a placement for the PA to hang that fit in with the rest of the set and lighting fixtures and wasn’t visible from a TV and audience perspective,” said Mark Dittmar, lead design and integration engineer at Firehouse Productions. “The VT4886’s were the only solution and the best in my opinion. With a 500-pound hang limit, they give us the power and coverage we need without a sacrifice. The VRX’s are great for tight pattern control for side fills as they are light and can be flown at the bottom of set features.”

The challenge of any awards show is dealing with the many microphones on stage and ensuring there is no feedback stemming from the house PA system, Dittmar noted. “The VT4886’s help to solve this problem,” he added. “In the past we’ve used a variety of small boxes, but this is a much more cohesive design and we’re thrilled that it worked out so well.”

To supplement the JBL loudspeakers, Firehouse utilized 24 Crown I-Tech IT 12000HD amplifiers, providing consistent power and sound quality. “We’ve been using Crown since the beginning,” said Dittmar. “They give us so much power in such a small package and communicate wonderfully with the JBL speakers.”

Dittmar explained that by setting the amps at 208 volts it gives them balanced power and produces less noise as well. “One of our favorite aspects about Crown is the ability to build a custom library of presets so we can control any speaker in our inventory with the proper power, our favorite being the VT4886’s.”

“It’s an honor to be a part of such a significant night and we are extremely pleased with the results from both JBL and Crown. Their excellence and support continues to give us the confidence we need to do our job to the best ability,” Dittmar summed up.