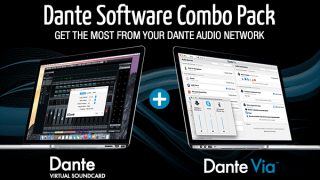 Audinate has announced the worldwide availability of the Dante Software Combo Pack, combining licenses for Dante Via and Dante Virtual Soundcard for only $59.95. This bundle represents a 25 percent savings over purchasing the software separately. The Dante Software Combo Pack facilitates computer-based audio flexibility and creativity, including recording of up to 64 channels of audio using favorite tools with Dante Virtual Soundcard; sharing of audio from applications and USB devices with Dante Via; and creation of computer-only audio networks and connection to any Dante system.

Dante Virtual Soundcard is designed to turn a computer into a high-performance Dante-powered recording workstation. Users can instantly connect to record, process, and play out up to 64-by-64 channels using any audio application and any combination of Dante-enabled devices and software. Like Dante Via, Dante Virtual Soundcard uses an existing ethernet port—no snakes, converters, special cables, or connectors are required.