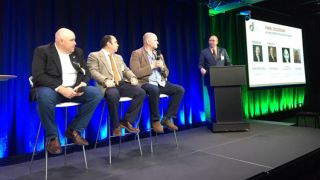 Digital Signage Federation’s Coffee & Controversy at New York Digital Signage Week (NYDSW) was, once again, a smash hit. This year’s event was held at the ultra-hip Google offices in NYC, and was filled with digital signage movers and shakers. So let’s get down with some well-known lyrics and see what happened…

The first panel at the NYDSW Coffee & Controversy.

Emerging technologies like AI are everywhere, and they’re being used in digital signage to give retailers smarter insights. This is not new for the industry, but mainstream awareness is now growing. Rich Ventura, DSF chairman, did a great impression of the general U.S. public: “Oh. My. God. There’s analytics. There’s facial recognition. Everybody’s watching us.” His point was well made; the American public is increasingly paranoid about technology’s intrusion, but, paradoxically, we’re becoming more used to it.

Addressing a question from the audience at Coffee & Controversy.

2. We Don’t Need No Education

Another takeaway from Coffee & Controversy: the end user doesn’t fully understand digital signage. It’s clear that more users want digital signage but misconceptions are still rife and large knowledge gaps remain. “There’s still a few sharks out there that just circle those types of customers and pick them off and strip them of all their money and leave them to it. It’s not a great representation of what we do,” said Tom Milner, managing director, Service & Support. “I’d love to see those customers come to us with a bit of education first. We’ve got to engage with them before we even think about selling to them.”

3. People Are Strange When You’re A Stranger

On the Digital Out of Home (DOOH) side of the house (pun intended), market conditions are now conducive for an investment in measurement systems. We’re taking a cue from internet companies and creating searchable data on consumers: who they are, how many of them are there, how long they are there. According to Kym Frank, president and CEO of Geopath, “We’re never going to be the internet and that’s an okay thing. We’re reaching bigger audiences but we can strive to be more targeted and strive to understand how the consumers are changing throughout the day.”

Megan A. Dutta is the editor of Systems Contractor News. Engage with live news from NYDSW via https://twitter.com/SCNmag.