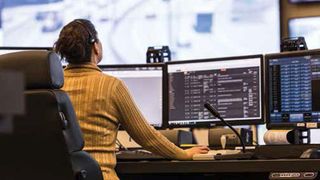 We all agree, traffic is the worst. The average commuter wastes about 42 hours a year stuck in a traffic jam. Not crazy enough for you? That’s up 26 hours from 1982, according to a traffic tracking company INRIX.

With all that time in the car, ponder this: “Who is controlling all this craziness on the roadway?” Hint: It’s traffic management centers. So, it should come as no surprise that AV plays a large part in the controlled chaos of traffic management. Let’s take a look at the upgrade of one particular facility, the Washington Department of Transportation’s (WSDOT) Traffic Management Center (TMC).

WSDOT’s first center dates all the way back to the 1960s in Seattle, WA. At that time, the TMC held just a few monitors to control the operations of the Interstate 5 Express Lane. Fast forward to 1992, and the WSDOT’s center had taken over an entire building, with foreseeable continued growth.

Due to the expanding system of cameras and detection devices, the WSDOT outgrew its current space in 2015, and decided to embark on the construction of a dedicated building for its statewide traffic monitoring services. A key element to the new center would be an updated monitoring system for traffic camera feeds, which would improve awareness of real-time conditions and allow for timely and efficient intervention when needed.

The WSDOT’s IT and IS staff worked diligently to ensure the main system’s functionality for compliance with the Traffic Management Center (TMC) requirements to monitor real-time roadway and traffic video feeds. However, with more than 750 cameras to observe and the need for a video wall to monitor highway accidents, traffic jams, tunnels, and more, the team realized this was an AV-heavy project that needed expert consultation, which is why they called upon Diversified, which had previously worked with the WSDOT systems.

Phase one of the project included the creation of a 90-monitor monolithic video wall. The install had several key requirements, including specific power needs, video wall processors, and ease of removal. The video wall would be comprised of three sections: left, center, and right. The left and right sections needed to be canted inward toward the center of the room at a 30-degree angle. The 46-inch monitors needed to include an OPS Video Processor and would need to be mounted flat to the wall, yet also permit the easy removal of any monitor, without the need to remove surrounding monitors.

A WSDOT employee uses the new video wall to monitor an area of interest.

WSDOT staff did a thorough review of numerous vendors and selected NEC P463 displays for the product’s ultra-thin bezel and because the monitors allowed for the purchase of new hardware for individual displays as needed. Peerless-AV SmartMount video wall mounts were nominated for the projects due to their ease of installation. Barco’s TransForm N solution and CMS software was chosen to enhance situational awareness and collaboration in the control room. With all of the components selected, Diversified tested the displays, video processing systems, and components to ensure full functionality ahead of time; the company did not want any on-site surprises at the WSDOT TMC.

Despite thorough pre-planning, there were a few bumps in the road, as there are with all audiovisual projects. According to Pete Monuteaux, account executive at Diversified, the first challenge was managing and executing the receipt, delivery, installation, and alignment of the displays throughout the operations center and supporting rooms within the facility. The second and larger challenge involved seismic bracing issues. Diversified worked closely with the WSDOT and general contractor to quickly resolve both issues.

Once the issues were resolved, phase one was completed and the WSDOT had easy access to viewing of the displays featuring live feeds from statewide traffic management cameras. Then, it was time for phase two, a much smaller, yet still important undertaking.

Phase two added a 3x4 video wall to the center of the pre-installed 90 displays. The addition of more NECP462 monitors, powered by a high-end Barco video processor, was needed to create amplified viewing of selected individual monitors, allowing staff to create detailed views of crisis situations and increasing their effectiveness in handling such situations. The installation was hung on Peerless-AV DS-VW-765-LAND mounts. “The installer’s team, in addition to my own, like the mounts,” said Michael Forbis from WSDOT. “I have personally taken down and installed a few monitors. The NEC P463 weights about 40 pounds and these mounts make dealing with the P463 a breeze.”

WSDOT is “very pleased with the new high-tech environment,” which has been working seamlessly 24/7/365 since its completion, according to Diversified. This new AV in the center has increased job efficiency, as the constant views of traffic condition and enlarged view of areas of interest allow its staff to make quicker decisions.