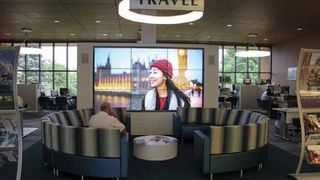 While best known as roadside assistance saviors, the AAA organization offers much more for its members, with services across insurance, hotel deals, and more. A large part of that “more” is its travel agency. And at AAA Minneapolis headquarters in nearby St. Louis Park, the iTravel Advisor travel agency has embraced digital media as a means to promote its services to members that stop by for any number of reasons. With approximately 205,000 members to its name, AAA Minneapolis has found an immersive tool to engage and inform those waiting in the lobby area in the form of a 13-foot, 4-inch-wide by 8-foot, 6-inchtall video wall.

Tierney Brothers designed, built, and integrated the immersive video wall at AAA Minneapolis headquarters, which uses nine 46-inch 1080p NEC displays, Carousel software, and BrightSign media players. Tierney Brothers of Minneapolis was engaged to design, build, and integrate the immersive 1080p video wall. Positioned in the center of its main lobby, the video wall treats visitors to a dynamic display of colorful, visually engaging content—such as video clips, slides, photos, and ads—designed to whet their travel appetites as they wait to see an agent.

“They wanted to move away from the static brochure holders and print posters that few notice, and provide a visual and very agile palette that really gives the consumer something to enjoy,” said Brian Krisko, vice president of services, Tierney Brothers. “Whether waiting to see a travel agent or a representative from a different AAA division, the goal was to deliver something that would capture attention and just be overall very pleasing. Given the layout of the lobby and the space they had to work with, building out a video wall made the most sense.”

Krisko and his team used D-Tools for the conceptual design phase, carefully laying out what the inside of the wall would look like across mounting systems, media players, and monitors. Tierney also designed the low-voltage electrical infrastructure and worked with a local electrical contractor to confirm power requirements for a nine-monitor (3x3) wall. A standard network cabling architecture married the Carousel server with nine BrightSign players over IP, without any needs for conversion or extenders.

“It’s an owner-furnished network with plenty of bandwidth, so there was no need to create VLANs or any kind of private network to support content distribution,” Krisko said. “The BrightSign players plug right into the monitors via RJ45 connectors, and using Carousel, the AAA Minneapolis staff can easily manage all nine of the players.”

“The video wall structure itself was sound based on our specifications, but when you have this large array of mounts hanging on the panels, there is always concern on the support side,” he said. “Often in commercial environments, we are dealing with metal studs, but in this case, we lacked a central structure to support that weight. So we approached this as a standard stick-frame construction project, and affixed the mounts into the wood with plenty of reinforcement to ensure a sound structure. It came out square and tight, and from there, it was working to ensure the system was properly grounded and that panels were appropriately positioned for maintenance if we ever need to service the mounts, players, or monitors.”

For the video wall technology, Krisko worked with Carousel software and BrightSign media players. He points to reliability and low power consumption as key BrightSign benefits.

“The Carousel and BrightSign combination is quickly becoming our go-to solution for an interoperable digital signage system across content creation, management, and playout for networks of all sizes,” he said. “Carousel brings exceptional ease of use to the creation and management side, while BrightSign brings a compact form factor with exceptional visual quality and reliability. We don’t have to worry about players failing due to Windows updates or operating system issues. The screens are always up and performing as expected.”

The data-rich capabilities of Carousel also enable seamless connectivity to any number of external feeds and ensure reliable display of real-time data feeds. The video wall also incorporates advertising mostly related to the iTravel Agency retail business on site, as well as sponsored advertising that promotes products available in the agency’s Travel Store, providing an ROI path for the agency. However, the stunning travel imagery is what makes the project most worthwhile for the iTravel Advisor team and its clients.

“From the moment visitors walk in the door, they see fantastic pictures such as cruise ships in blue oceans with colorful fish swimming around,” said Linda Snyder, vice president, travel and retail services for AAA Minneapolis. “Carousel and BrightSign work together to present visuals that are incredibly crisp and clean. It’s very stunning to take in, and we find that dwell times are considerable—an important point since the video wall is advertising-supported.”