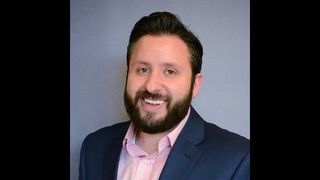 Why You Should Know Him: When you get tired of watching people flail around, attempting to describe what’s next for our industry, tap TJ DiQuollo on the shoulder and ask him what’s what. He speaks with amiable conviction about where we’re headed because he has actually worked on the types of projects we weren’t sure would ever happen. Would advertising agencies ever really understand “digital signage?” And more, would they ever actually see an AV designer as a creative force? Well, yes, that happened, and TJ resides right at the crossroads as director of creative services at Diversified. “Some people are creative, and that’s all they see, and some people are engineers, and that’s all they see,” he described, but what clients need today are “people who have the creative vision of what they want to display and also know how to connect the wires needed to get it there.”

How He Got Here: Some kids work summer jobs as golf caddies, some kids help produce a national broadcast from the green. Leveraging his youthful experience working in his father’s electronics store into a job building production trucks at National Mobile Television when he was 15 years old, DiQuollo went on-site for major sports broadcast events and learned as much as he could from the technical directors and producers. That led naturally to a communications program in college, during which time he fell into a role as a marketing representative for then nascent Red Bull North America. It was then and there that technology met creativity. “No one was doing marketing like they were at that time,” he recalled. “They didn’t have any ads at that time, just brand marketing, which blew my mind on branding and marketing in general.”

So How Did AV Win Him? Believe it or not, the very nebulous notion of digital signage ten years ago is what drew DiQuollo into our world. After graduating from college, he found out about Diversified through a broadcast engineer colleague from his earliest career days (see: teenager, broadcast production trucks), and started working in the production department. Then lightning struck: “I found out about digital signage, this emerging market that sounded like a really interesting place where I could blend my AV passion and my marketing and branding passion—it’s like it was made for my brain.”

Why You Might Want to Ask Him What’s Next: DiQuollo has worked in digital signage since the dark ages of the pre-smartphone era, when a passive loop of video or a glorified digital poster passed for content. Fortunately, his work at Diversified provided opportunities to work on large-scale, forward-thinking projects in Times Square and in partnership with major retailers, so he’s tried out all the new stuff as it has happened.

Get to know the rest of The Nine