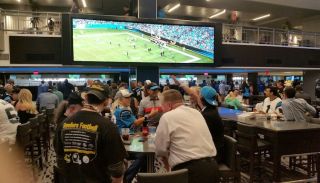 Integrator S.E. Systems installed RCF VSA vertical steerable arrays in the Carolina Panthers luxury lounges as part of the final stages of Bank of America Stadium’s upgrades. In 2013, Charlotte made a commitment to stadium upgrades to keep the team in town and maintain the most modern standards. First, in 2014 the stadium added two 200-by-56-foot video boards, able to project 32:9 images. Ongoing stages included renovations to concourse areas, the creation of fan plazas, and updating all the luxury suites. This year, the continued renovations included the upgrades to four luxury lounges: the North and South 50 Club, the Panther’s Den, and the Redzone.

With the impression of the 32:9 outdoor screens, longtime Bank of America Stadium audiovisual suppliers S.E. Systems set out to replicate the outdoor images in the luxury lounge areas with a 32-by-9-foot screen in each of the four lounges. When it came to audio, there were a number of factors to contend with. The lounge areas are open, with concerns about noise levels and loss of intelligibility due to reverberations. Each lounge also has buffet-style serving areas on either side of the seating areas, of which there was need to reduce sound levels for the convenience of customer orders and processing. And with most of the lounges having a throw of 24 feet or less to the back wall, of which some were glass, this once again created potential issues with sound.

Having familiarity with the RCF VSA vertical steerable arrays, S.E. Systems owner Cliff Miller felt using these would be the ideal solution. “First, they are a very low profile, which enabled us to build them into the millwork of the video board and keep the sound projected as if it is actually coming from the source,” Miller said. Secondly, “with the capability of steering the sound with the VSA DSP, we are able to focus the audio exclusively to the seating areas.”