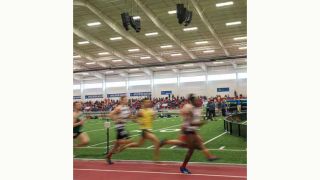 The bar for college sports has risen—with so many uses for field houses, higher-ed sports facilities are now looking for concertgrade sound to accommodate their needs. Such was the case at Pittsburg State University (PSU) in Pittsburg, KS, where Kansas Citybased Reliant Media Systems was brought in to design a sound system that was concert-ready at the Robert W. Plaster Center.

A VUE Audiotechnik audio system was installed at the new Robert W. Plaster Center to allow the school to use the center for multipurpose events, all with a concert-grade sound. The main role for the Plaster Center is to serve as a field house for track and field events. Traditionally, these types of facilities only need a distributed audio system, but Pittsburg State wanted something a little stronger.

“They wanted to do something that was completely different, and pursue a concert-quality system and stay away from the distributed approach,” explained Zach Aaron, director of events and integration with Reliant Media Systems. “There’s a dual purpose for the Plaster Center, so we needed a system that could accommodate the alternate purpose as a community event center.”

Of course, designing a sound system of this magnitude met some structural challenges.

“All of our system weight was suspended in the building, and that took a little bit longer,” Aaron said. “We were able to install our original design, with six columns of VUE Audiotechnik line arrays in the round, so from the apex of the building, we were able to obtain venture points we needed. That took a whole lot of time to review.”

“We were adding to an existing structure, and didn’t foresee hanging 6,000 pounds from the ceiling,” added Jeff Taylor, VP Americas, VUE Audiotechnik. “We had to get the architects involved to make a rigging solution that was minimally invasive.”

What Reliant Media Systems and VUE came up with was total solution that included a background music system in the weight room, and a full, concert-grade sound system in the field house, which can be reconfigured for other events like graduations, local events, meetings, and more.

“This school had a vision of enhancing its athletic program, and in order to make that financially possible, they went to the city for help,” Taylor said. “The investment allowed us to design a facility that serves multipurpose for not only educational directives, but also the objectives of the surrounding city.”

In the main field house, VUE Audiotechnik al-8s, al-4s, and al-8 subs were used, with BSS processing, and a Soundcraft Si Performer soundboard to control the speakers.

“There’s nothing too unorthodox about how the line array is installed, rather just seeing the distributed approach with the gear,” explained Aaron. “The most notable feature is the fact that this room was possibly in the worst environment for highfidelity performance installation. What a system like that does for a room of that sort is absolutely incredible—in our opinion, this is probably one of the best-sounding athletic facilities we’ve been in.”