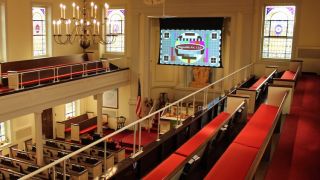 St. Paul’s Wolf’s ECC recently received a major audiovisual upgrade. With its goal of leading people to follow in the footsteps of Jesus, St. Paul's Wolf's Evangelical Covenant Church in York, PA gathers to inspire parishioners to better their lives and those of the people around them. To do so, it must first be able to offer a clarity of message, which is why St. Paul's Wolf's recently completed a substantial overhaul of its AV infrastructure in October 2017; the house of worship (HOW) recently added a new sound reinforcement system and also included Eiki International projection capability with a Draper screen.

Reynolds AV of East Berlin, PA was contracted to design and deploy the church’s new AV equipment. Karl Reynolds, the firm’s project manager, was tasked with coordinating system design and project management, plus customer training and service. After consulting with church management to determine their goals and requirements for the facility upgrade, Reynolds elected to install an Eiki EK-811W, 8,000-lumen WXGA DLP laser projector to handle visuals in the sanctuary.

The HOW has a very historic, traditional focus. “Services at St. Paul's Wolf's lean toward the more traditional with a blend of hymns combined with some contemporary music,” said Reynolds.

The sanctuary, which seats about 250 people, was last structurally renovated around 1928. At the same time, colorful stained-glass windows were installed. “The cozy atmosphere balances the traditional importance of the worship services,” Reynolds said. “Church officials wanted vivid, clear visuals to help engage the congregation.”

So, Reynolds set out to alleviate concerns and brought in a light meter to measure the venue’s ambient light. Using this guideline, he was able to ensure “optimum image quality on the screen during typical usage.”

To accomplish his image quality goals, Reynolds used the aforementioned Eiki projector because of its ability to handle a wide variety of content, including PowerPoint presentations, lyrics, and videos. In addition, it is able to play output from a Sony HD PTZ camera used for the church’s children’s programming. “The Eiki projector delivers exceptional images; bright, easy-to-read lyrics; and more,” said Reynolds.

For display of the visuals, the Reynolds AV team deployed a 65-inch-high by 116-inch-wide Draper screen designed for ambient light rejection. This is a “reverse roll” front-projection tensioned screen mounted behind the opening of the chancel area. With the projector located on the balcony at the rear of the sanctuary, the throw distance between the screen and projector is approximately 55 feet.

“Traditional sanctuaries are not designed for AV, so they pose real challenges,” said Penny Sitler, marketing manager at Draper. “It isn’t easy to project clear visuals with sunlight streaming through stained glass windows!”

Reynolds AV used a Draper Premier screen with a TecVision MS1000X ALR ambient light-rejecting surface. According to Sitler, this formula rejects 73 percent of ambient light in the room, and is ISF certified for color accuracy. “The Premier electric screen is a popular choice in houses of worship, because it’s easily retracted and hidden when not in use,” she stated.