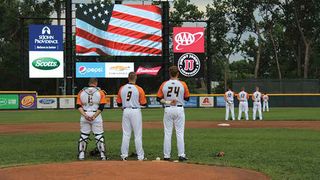 It’s hard to find a more family-friendly summer activity than going to a minor league baseball game. The thrill of seeing potential future allstars up close and personal at old-fashioned prices draws in the serious fans of the game, but there’s always plenty of entertainment for everyone else: zany between-inning spectacles like dizzy bat races and traveling animal shows, whimsical mascots, and fun music.

Bluewater installed the field’s 40-foot-wide by 23.5-foothigh video scoreboard using Absen 10-millimeter pitch LED panels. Putting smiles on the faces of everyone in the family was one of the goals of Andy Applby, owner of General Sports, when he founded the United Shore Professional Baseball League (USPBL) and built the stadium that would serve as the home for its three teams, Jimmy John’s Field, in Utica, MI, a suburb of Detroit. And while the games might not be loaded with potential big-league talent—the league is aimed at undrafted 18-25 year olds who are working to sign MLB-affiliated contracts—they’re still a prime destination for family entertainment, thanks in part to the stadium’s top-notch audio and video technology, installed by Southfield, MI-based Bluewater Technologies.

In specifying the sound system for the 4,000-seat stadium, Bluewater kept things local, choosing Waterford, MI-based ISP Technologies for all of the loudspeakers, which cover the 22 suites, cabana and picnic areas, and the grass berm seating area. “We approached ISP and asked what we could do for a stadium system,” said Randy Hall, systems design engineer at Bluewater Technologies. “We involved the manufacturer and put together a system that sounds really good.”

ISP worked with Bluewater to custom develop 19 CX Series coax speakers, which were hung along with four XMAX 218 subs to provide 23,000 watts of power to cover the field area with professional level sound. For the suites, concourse, and restaurant, ISP and Bluewater decided to use the manufacturer’s High Definition Distributed System (HDDS) line of loudspeakers, which feature an integrated design for simplicity.

ISP Technologies loudspeakers cover the 22 suites, cabana and picnic areas, and the grass berm seating area. “The [HDDS] cabinets have the amplifiers built directly into the speakers, so there’s no loss of fidelity across the speaker line,” Hall said. “They distribute it over Category 6, and depending on each speaker’s current load, will depend on how many speakers you can connect to that run. We use two speakers per run, and ran a Cat-6 out there and jumpered it over to the second speaker. And we did it in different zones, so all of the delays would match up.” And since all of the HDDS speakers are powered by the same Cat-6 cable that carries the audio signal, installation process was simplified, as well. The audio system is controlled by a Soundcraft Si Expression 2 board, and the digital signal processing is done via a Biamp Tesira SERVER-IO.

On the video side, Bluewater installed the field’s 40-foot-wide by 23.5-foot-high video scoreboard beyond the center field fence using Absen 10-millimeter pitch LED panels. On either side and beneath the main video board are smaller sponsor boards composed of Absen 16-millimeter LED panels. There’s also a two-sided marquee that sits along the highway near the entrance to the park, which uses 16-millimeter Absen LEDs and is driven by a BrightSign player. One of the biggest challenges in the installation, Hall said, was getting the video signals out to the various displays.

“There were a lot of long distances involved,” he said. “We ended up running the feeds out to the scoreboard over single-mode fiber, so we could easily get all of the signals out to the board and make sure they got out there correctly.”

The project, which was largely completed during the winter months, ended up coming together smoothly, and all the equipment was ready for the league’s inaugural opening day this past May. “The response from the local community has been outstanding,” Hall said. “The first several games sold out, and it got good reviews on the local news.”

When the league’s three teams—the Beavers, Hoppers, and Unicorns—play one another this summer, Metropolitan Detroit residents can indulge in the great American tradition of taking the family out to the ballpark. And thanks to the stadium’s top-notch AV amenities—which are sure to be a star on upcoming promotional nights such as “Beatle Mania”—they can get major-league entertainment at a minor price.