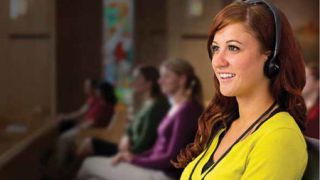 To appropriate comedian Rodney Dangerfield’s routine, 17 percent of the population in the United States gets no respect.

Listen Technologies jumped into the ALS market in 1998, and over the last year, has been rolling out its next-generation RF, infrared, hearing loop, and Wi-Fi products. Seventeen percent is the figure often quoted by assistive listening system (ALS) manufacturers as the segment of the U.S. adult population reporting some type of hearing trouble. That percentage, from a 2002 National Health Interview Survey (NHIS) study conducted by the Centers for Disease Control and Prevention’s National Center for Health Statistics, represented 34 million people at the time. The most recent NHIS study, published in 2015, now puts that figure at 15.8 percent, or approximately 51 million people.

In 2010, Congress passed the Americans with Disabilities Act (ADA), a set of standards that included a requirement for an ALS to be available in any publically accessible assembly area where audible communication is integral to the space and where a microphone and/or speakers are in place. The ADA took effect in March 2012, yet even today, a venue’s receivers may well be hidden away someplace, if it even owns any. And good luck finding a receiver with sufficient battery life remaining.

According to Tony Strong, national sales manager for Williams Sound, “The problem with getting people interested in complying with the ADA is multifaceted. Consultants may specify it, but clients may have to value engineer their solution. The assistive listening system is one of the first things to go.”

The ADA included a table stipulating the minimum number of ALS devices required relative to a venue’s capacity. The sliding scale ranges from two for locations holding up to 50 people to 55 plus one per each hundred seats over a threshold of 2,001 seats, of which 25 percent must be hearing-aid compatible. “If you’re looking at a venue with 50,000 seats, that formula can become financially burdensome,” commented Strong.

One of the country’s largest population groups, baby boomers, is aging and generally experiencing hearing loss. Reports have also shown that youngsters are having hearing problems, due in no small part to listening to over-loud music on their personal devices. “There is an end-user glut,” said Strong. “Knowing that, there’s an economic benefit to an integrator and AV supplier to provide solutions that are helpful and add value to the client, but also comply with local regulations and building codes.”

“You’ll notice that our product is one of the few out there that’s not black,” said Kevin Stoner, director of operations for Media Vision. “We want to think of it as more of a mainstream product. We want the cool factor.”

Media Vision, a conference and meeting equipment company, only recently added an assistive listening product line, an RF system operating in the 72-76 MHz range mandated by the FCC (along with 216 MHz, for long-range applications) for ALS devices. “We’ve had the benefit of coming into the market a little later than some of our competition,” said Stoner. This has enabled Media Vision to incorporate newer technologies, such as Dante networking between its stationary base transmitters.

The portable units offer features such as automatic shutoff when not in use to save power. “We also designed it to use AA batteries; you can buy your batteries at 7-Eleven or Walmart,” said Stoner.

“We didn’t look at it as this thing you want to hide. We looked at it as a device to put out in front of people.”

Media Vision, a conference and meeting equipment company, only recently added an assistive listening product line, an RF system operating in the 72-76 MHz range mandated by the FCC (along with 216 MHz, for long-range applications) for ALS devices. Listen Technologies jumped into the ALS market in 1998, and over the last year, it has been rolling out its next-generation RF, infrared, hearing loop, and Wi-Fi products. According to Peter Papageorge, the company’s vice president, sales and marketing, Americas, “[President/CEO] Russ Gentner and team created the company based solely on assisting those that need it the most.”

The company’s new iDSP products address the needs of both users and venues. “It’s the size of a small flip phone; it’s a truly portable device,” said Papageorge. It can be charged with a standard USB connection and the neckloop lanyard—which delivers the receiver signal to a hearing aid’s telecoil via an electromagnetic field, in the same manner as a venue’s installed loop—is integrated in the lanyard with one less thing to manage for the venue, he noted.

Perhaps more importantly, said Papageorge, iDSP uses rechargeable lithium-ion battery packs. “With typical use, this will last five to 10 years. So our units will pay for themselves over time, just in the battery savings.”

Venues can play a part in raising awareness of assistive listening issues, he added. “We recommend going beyond the ADA placards with digital signage slides. Having the units displayed and available is just as important.”

Training is also important, both for venues, where staff may be volunteers unfamiliar with ADA compliance or equipment operation (or location, even), as well as for integrators, consultants, and architects. “It’s an integrator’s job to educate the client that they need to have these systems,” said Strong, who travels the country for Williams Sound providing training.

Consultants and integrators could help their clients and themselves by promoting these mandated products as multi-use solutions. For example, a public facility is required to have a certain number of receivers and a transmitter, said Stoner. “What’s to keep them from also purchasing a portable transmitter and using those same receivers in another application, such as tour groups for the families that are visiting a college? You’re providing assistive listening but you’re also regularly using the receivers in another way. Your investment doesn’t just sit in a box.”

Integrators also need to know enough to make their clients aware of potential pitfalls. Strong has worked with school districts that have installed a mic and ceiling speakers for teachers, a proven method for increasing test scores and reducing attention deficit disorder problems. “So this school, which spent all this money thinking they were providing hearing assistance, has changed the ADA classification of that space. Now it has an installed PA.”

ADA compliance requires that an assistive listening system be available, but it need not necessarily be an installed solution. “We create portable systems, so that one box can be used to accommodate ADA compliance for the whole building or that whole floor,” said Strong.

But while it might seem an uphill battle to ensure proper ADA compliance at every relevant venue, Papageorge believes that public awareness of hearing problems is generally increasing. “Go to Sam’s Club or Costco, and you’ll see you can get your hearing tested and buy a hearing device,” he said. Even so, not everyone will admit to hearing loss, or wish to be seen—in fact, hopefully not be seen—wearing anything but the most discreet device.

Ironically, churches, which are exempt from the ADA (except in California), have the highest rate of compliance. Yet people may still be reticent to request a device. “We have situations where end users at churches are buying a personal iDSP receiver,” said Papageorge. “Because the ultimate discretion is not asking for anything and charging it at home next to their smartphone.”