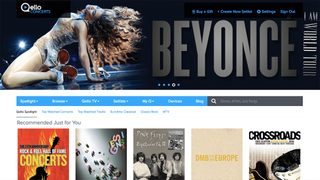 There’s nothing that beats the thrill and experience of a live concert experience for music lovers, yet the reality is that attending a concert can oftentimes be complicated. There are tickets to secure, logistics to plan, business schedules and personal obligations to coordinate around. And for some people, the experience of a crowded music venue just isn’t all that pleasant sometimes.

As video on demand and live streaming consumption models have proliferated in home entertainment, there’s a growing fad to bring the concert into the home. The so-called “couch tour” is being embraced by young live music consumers and furthered by bands like Metallica, Bruce Springsteen, Pearl Jam, Phish, Red Hot Chili Peppers and many others. Live production companies, music festivals, and venues are witnessing an appetite for pay-per-view revenue sources.

Qello Concerts is an OTT streaming service for full-length concerts and music documentaries on demand, a sort of Netflix for live music. Qello recently launched a Live section to further support the couch tour movement. Venues like the Capitol Theater in Port Chester, NY and Brooklyn Bowl have invested in the production gear, and via a live streaming partner have select concerts available for purchase by home viewers on any mobile device and all the major OTT boxes.

So how does it work for a venue? You’ve got some cameras, maybe just one even, there’s a producer staffed, in-house or outsourced to a production company, there’s encoding either on premise or in the cloud, and from there, it’s mostly bandwidth. There is some paperwork involved, having the artist sign off, sometimes the label needs to sign off, and Qello will cover the performing rights organizations.

The benefit for Qello is that a venue can help drive fans to the platform and grow its subscriber base, along with growing its content sources and thus enhancing the service.

The best part for a venue is that partnering with Qello is free. “We’re not asking [partners] for a fee to use our service because we think we’re going to get people to subscribe,” explained Rich Johnson, co-founder and chief revenue officer at Qello. “We’re just saying, ‘hey, you deliver great audiovisual music to us, we’ll deliver a flawless experience, and let’s just call it a day.’”