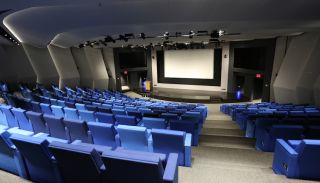 Arup recently finished a Time Inc. fit out that included a 300-seat auditorium equipped with two video walls adding IMAG on either side of a traditional center-hung projection screen presentation setup. Making a bold play for unified communications, Shen Milsom & Wilke has brought on Mark Peterson as associate principal and corporate market leader. Peterson comes from Morgan Stanley, where he was VP of end user services, unified communications, and collaboration. So he’s kinda the ideal client to bring into the fold, according to Steve Emspak, partner with Shen Milsom & Wilke. Peterson contributed to the entire unified communications plan for Morgan Stanley as part of the team that rolled it out. "So he brings end-user perspective and a real understanding of the technology and how to implement it globally.”

Peterson is a good example of an overall perspective shift in the industry, Emspak noted. “It’s very interesting. In meetings now the conversations are really not AV discussions. It’s a discussion of the IT world, the applications world, and how this stuff lives together—and oh yeah, there’s a TV in the room, okay fine, we got the AV thing covered, now let’s start talking about the applications running in that room, and what are the interfaces that allow someone to use that room.”

That sounds a little bit like the definition of the Internet of Things (IoT), which is another area of broad specialization coming to the fore in AV. Having recently acquainted himself with an industry white paper on the subject, Ben Bausher, senior consultant, audio/video with Jaffe Holden, summed up this new umbrella term. “We’ve been doing this for the last 15 years—we just call it a control system or a network.” Which, he added, means the same old issue applies: “We need standards. I can put together a lot of different stuff on one network, but unless it’s designed to interoperate, I don’t have an internet of things, I have a bunch of internets of one thing. I don’t want a bunch of internets; I want one internet.”

Too many networking options are still proprietary, and that prevents true interoperability, Bausher pointed out, and then he rocked some IoT lingo: “Those standards of communication—that API—can be open to everybody; there’s no reason it has to be a walled garden. Just like people publish their RS-232 control strings, there should be more transparency. The more open it is, the more people will use it, and the better it will be.”

Alright, so that’s one new specialty that sounds pretty similar to what we’ve done in the past. What about good old audio and acoustics—where do they fit into this new hierarchy? Well, good sound serves the greater purpose of “fan engagement.”

Case in point, Marsh/PMK’s recent audio and acoustic update to the Oklahoma City Thunder’s Chesapeake Energy Arena. The first NBA arena to boast EAW’s Anya system, the new sound spec was all about boosting entertainment value for the games and enhancing the flexibility of the venue for other events.

Crowd noise is big business in the NBA, but so is the prospect of understanding commentary over the PA. “They like it loud, but the existing sound system was not very intelligible, and it didn’t have the punch they wanted for entertainment value,” explained David Marsh, president of Marsh/PMK.

Measurement studies for the project evaluated the effects of several acoustic setups, and the winning combination will be seen early next year, when horizontal acoustic banners are hung above seating to reduce reverberation time for better intelligibility. Additionally, Marsh/PMK specified huge sound absorbing signs around the ‘drum wall’ (above the upper deck seating) and sound absorbing signage on the front faces of Terrace Suite boxes at each end of the arena. The signage serves to mitigate audible echoes, as well as to further reduce reverberation.

Now for the grand finale of “serendipitous browsing.” That’s the new way to say “collaboration.” At least I wish it was. That’s a phrase borrowed from the library world and used by Matt Mahon, Arup senior consultant, acoustics and audiovisual, to describe the happenstance experience of new ideas gained by wandering open-office workers as they see and hear the goings-on in other departments.

It seems that open-plan offices are getting smarter, along with the terminology used to describe their benefits. Not only are more designs including a variety of spaces for people who like to work in a variety of ways (e.g., providing shelter for introverts), but they’re also just, like, cooler. The now ubiquitous “town hall” space has brought a mega-tech sensibility to more staid companies, and that means video walls and IMAG, friends.

Arup recently finished a Time Inc. fit out that included a 300-seat auditorium equipped with two video walls adding IMAG on either side of a traditional center-hung projection screen presentation setup. “It’s the TED Talk style that’s been driving a higher-quality expectation,” Mahon noted. Going beyond the still-commonplace flashy LED displays in entry areas, primo preso setups are helped by the fact that it’s “getting much cheaper to do these big displays. So we’re seeing more and more of these casual spaces where you can do complicated technical things with video—talks, events, and even exhibitor setups.”