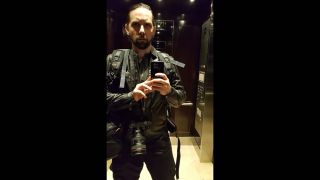 When the events master and video scenemaking innovator Brian Dickson agreed to be the closing presenter for InfoComm’s Center Stage program, he immediately started describing a session to end all sessions. There would be live 360VR capture, audience participation in content creation, and the craziest sounding wireless pixel-mapping solution anyone had yet to build. And yet, he built it.

To make sure everyone present could participate in this truly immersive, interactive video jamboree, we ended up giving Dickson the entire final hour of the Center Stage lineup on Friday, June 16, from 2:00 p.m. to 3:00 p.m. After all, he was going to bring his entire bag of tricks with him. Literally a bag—a backpack, in fact.

Another project of Dickson’s is to develop a truly portable production suite that would replicate the capabilities of the giant server rack he usually needs to run the stunning live events and video shoots he creates as director of video production for No Static AV in Burbank, California.

Talk with Dickson for five minutes, and you’ll hear the conceptual become actual in real-time. He’s figuring a way past technical limitations on the fly, and that’s why you’ll want to go to your InfoComm calendar right now and put his session on your schedule—or tune in for the live streaming that InfoComm will be doing from Center Stage.

Here are four technical temptations in which you must be present to participate at the Center Stage finale with Brian Dickson and No Static owner and CEO Eugene Gordon:

1) Live VR360 Capture for You and Me: Using a six-camera GoPro rig that aspiring VR360 makers can realistically replicate, Dickson will do some live video stitching on the giant screens at Center Stage. Depending on the antics of the cameras and the converters in the moment, there could be some amazing immersion going on. Or there might be what Dickson calls “Gordon Ramsey style” cooking show action, where we skip ahead to the fully cooked meal.

2) Check Your Backpack: With new gear he just built in the last few weeks, Dickson has arrived at a truly portable production pack. Now, using only a Hewlett-Packard Z-Book laptop, Blackmagic converters and the new Atem TV Studio Switcher, and custom-built hardware he can fit in a backpack, he can run a multi-cam production setup with live streaming and a switcher that is also controlling wireless video pixels, utilizing WiFi and Thunderbolt 3. Yes. Really.

4) You Saw it Here First: More compact hardware innovation comes in the form of a new wireless pixel mapping setup that Dickson built. Using a battery-powered video pack about the same size as a deck of cards, Dickson can wirelessly stream content to individual pixel units scattered throughout a space—the micro devices can be hung from the ceilings, dropped into table centerpieces, embedded into tables, or attached to walls. They’ll all dim and glow in a unified gradient to create a magical effect throughout a room. You know you want to see these little pieces of hardware wirelessly change the atmosphere at Center Stage.

So, rather than wandering aimlessly as InfoComm comes to a close on Friday, make the most of your time by coming to the interactive technology happy hour that is Brian Dickson’s Center Stage Finale. Bring your knowledge and ideas, and let’s see what can be built next.