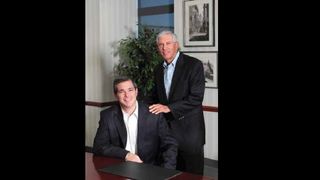 Warren Chaiken (left), president, with his father, the company’s former president, Gene Chaiken. Seventy years is a long time—nearly the life expectancy of a human, and many times longer than most businesses are able to last. But that’s exactly the milestone Almo Professional A/V reached this year. But unlike a bleary-eyed septuagenarian, the AV distributor is looking as sharp and nimble as ever, scouring the industry for ways to innovate like a bunch of fresh college grads launching a startup.

Almo was founded in 1946 in Philadelphia as a distributor of radio tubes by partners Albert Margolis and Morris Green (“Almo” is a portmanteau of their first names). The distribution company transitioned through the following decades by successfully buying and selling off divisions as market opportunities came and went, including an industrial parts business and a computer parts division—all while maintaining a core business built around consumer appliances.

It wasn’t until 2009, however, that the company applied its decades of distribution know-how to the professional audiovisual market. Sam Taylor, now the company’s executive vice president and COO, approached Almo with the proposition of integrating his background in the pro AV field into the company’s already extensive business. Seven years later, Almo Pro AV is the largest privately held distributor in the industry, and a $1.2 billion company.

“Seven years ago Sam came to us. He believed in what his people could do, he saw what our culture was, and this team really worked well together,” said Almo’s president and CEO, Warren Chaiken, who is the grandson of founder Morris Green. “And really when it boils down, it’s not about the inventory that we have in our warehouse; it’s about the people we have and the dedication they give to us, as well as our customers and our vendors to add the value that we do in the marketplace day in and day out.”

Adding value is indeed one thing that Almo does to separate itself from the competition. Two years ago, it began offering its Content Creation Services in response to customer demand for assistance in creating and selling digital signage solutions. “Our customers were buying digital signage products from us and integrating it into projects, but they were coming to us and asking for places where they could develop content for their end-user customers,” Taylor said. “So we looked around, and there really wasn’t a good place to send them. And we decided that this would be a good value-added service for us to provide for our integrators.” Not only does this simplify the lives of Almo’s integrator clients, it also opens an avenue for them to earn recurring monthly revenue (RMR).

Almo volunteers participated in the planting of 70 trees the company donated to Philadelphia for the city’s ‘Love Your Parks’ week, which kicked off on May 9. Since adding this service, Almo has gone on to offer two more service programs: Installation Services, which provides companies with a pool of independent AV contractors to temporarily supplement their workforce for tackling extra-large jobs, or to work outside of their geography; and Almo CONNECT, enabling integrators to earn RMR by specifying custom bandwidth solutions from the likes of Comcast and Time Warner for high-use clients, such as universities and hotels. Taylor said the company is exploring the possibility of rolling out a programming service to help integrators handle difficult or large-scale control systems.

So, while Almo Pro A/V could be spending this anniversary year by looking back on its past, it has made it quite clear that its primary concern is the future. Its small celebrations— highlighted by the ceremonial donation of 70 trees to Philadelphia in May for the city’s “Love Your Park” week—have been overshadowed by forward-thinking moves like its acquisition of IAVI.

But according to Chaiken, calculated deals like the IAVI acquisition are just something the company has always done throughout its history, and he plans to keep Almo on the same path going forward. “I think we continue to keep doing what we’re doing,” he said. “We run a marathon; we’re not sprinting to do what we need to do. We’re patient; as a private company, we have that ability. We don’t need to worry about Wall Street. We run our business in the vision that we’ve created over the past 70 years, which is slow and steady growth, one that we believe in as far as a value add, and one that we believe in our people.”

On Top of the World

IAVI, which maintained a significant footprint in Latin America, will begin the process of integration into Almo, creating one company going forward, according to Sam Taylor, Almo Pro A/V’s executive vice president and COO. “We’ve received an extremely positive response about the acquisition from the AV community,” Taylor said. “As part of the business plan, we have retained over 60 former IAVI employees, all of whom will stay in their respective locations and conduct business under the Almo name. These factors will greatly expand our capabilities and reach while increasing our ability to provide the industry with the best distribution service, products, and integration support available.”

According to Warren Chaiken, Almo’s president and CEO, the acquisition won’t just be a one-way street in terms of business operations; Almo has been analyzing best-practice standards between the companies to decide what’s best for its total customer base.

So what’s the next move for the world’s largest AV distributor? “I think right now, our focus is that we want to make this integration as smooth as possible for our new employees, as well as for our customers,” Chaiken said. “And that’s our goal for the foreseeable future. Almo is a very opportunistic company, and if there are other opportunities that present themselves, we’ll look at them.”