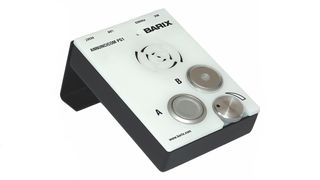 At ISE 2017 (stand 8-N270), Barix will showcase its new Simple Paging app for Android phone users, plus its newly released SIP-based support for redundant PBX systems, among other audio-over-IP products.

Barix will demonstrate how its SIP gateway can now allow registration with redundant PBX systems, the latest step in the company’s commitment to SIP integration. With this enhancement, SIP-based telephone operators can register devices serving as their SIP client(s) to back up both their main and redundant PBX systems.

In providing this support, Barix is addressing the trend among VoIP integrators to marry intercom, paging, and music-on-hold applications with SIP-enabled PBX telephone systems, providing systems integrators and end users with a centralized control and management platforms for virtually all communications. By enabling redundant streams with seamless switching, systems integrators also now have a more fully formed solution to maximize reliability and customer uptime in corporate and other business environments.

“Supporting redundant PBX systems is the next logical step and a natural progression in Barix’s long-running support for SIP integration with standard VoIP systems to support paging and intercom,” said Reto Brader, Barix’s VP of sales and marketing. “Our products also provide music on hold and messaging (MoH) for these phone networks, and we are constantly developing new products for this market in response to customer demand.”

Simple Paging, first introduced at ISE 2015, gives systems integrators a way to transition schools and businesses to an IP paging and public address system that can additionally support background music, emergency notification, and other services over a common network. Simple Paging also gives end users the flexibility of paging from a master paging station at a fixed location, or from a mobile phone while on the move using the Barix Simple Paging app.

Previously only available for iOS devices, the Simple Paging App has now been developed and made available for Android users, and offers the same flexibility to broadcast a general announcement or time-sensitive alert to an entire facility or user-specified zones selected in real-time.

“Mobile phones are becoming central to how we manage our lives, both at work and at home,” Brader said. “The Android app now, along with an update for iOS 10 devices, makes Simple Paging available for the large majority of mobile device users worldwide, an invaluable tool for controlling their announcement systems from anywhere, at any time.”

In addition, Brader will give a presentation on “Paging and Intercom in the Age of Mobile” at ISS. Brader will share his insights into trends and developments on this emerging topic, and put paging and intercoms into a 21st century IP context for attendees in the Audio Theater on Friday, February 10, 2017 at 12 p.m. local time.