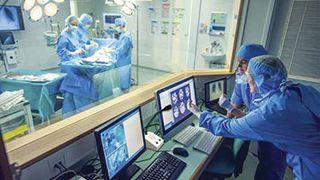 Telemedicine has come a long way since the days when two-way radios and telephone lines enabled doctors to provide healthcare to patients at distant locations. Now, less than 30 years after the introduction of the first interactive telemedicine system—a defibrillator and monitor controlled over a phone line—physicians are poised to enter a world of robots and virtual reality that would once have been considered science fiction.

Brent Tremblay of Pointmaker demonstrates the marking features of a Pointmaker on several medical images, including an X-ray of a shoulder. Telemedicine—broadly, the use of medical information exchanged from one site to another via electronic communications to improve a patient’s clinical health status—has been used for decades to deliver healthcare services to remote patients. But advancements in AV and information technologies, bolstered by ever-improving high-speed broadband access, now enable doctors to consult and participate in medical procedures in real time from the other side of the world.

Anyone who has watched a live sports television broadcast will be familiar with the telestrator, which allows a commentator to indicate things of significance on the screen. Pointmaker, the Tucson, AZ-based company that introduced the technology, found a receptive audience among U.S. broadcasters, but soon saturated the relatively limited market.

“In order to have a continuing business, we moved into AV, which has much broader applications, including medical,” said company president Pat Brey. The best example of Pointmaker’s application in telemedicine is videoconferencing, said Brey, whose “eureka” moment came at the National Institutes of Health (NIH) in Washington, DC, some years ago.

“The question becomes not only economical but technically, where is the best place to do your analog-to-digital conversion?” said Mark Dundas of Tech Works. The NIH director commented that the videoconference room typically sat unused, but he couldn’t figure out why, Brey recalled. “They would be looking at slides of tumors and cells and want to discuss them in a videoconference, but nobody could see what they were pointing at. By being able to draw a circle around it, people at the far end knew exactly what they were talking about.”

The Pointmaker video annotation system utilizes a touchscreen that also displays the current presentation information. “The doctor touches the screen, circles the area of interest, that screen is connected to the Pointmaker, and the video with that information is relayed to the far end,” explained Brey. The system is also being used at San Diego Children’s Hospital, where several operating rooms feed an amphitheater where doctors and students can observe, he offered as an example.

“I witnessed a robotic procedure in Santa Barbara,” he continued. “If you do remote robotic surgery, you have the same problem—you’ve got video as the shared medium and people needing to focus on that.”

Responding to an increasing demand for chemotherapy services and a comfortable patient experience, Vanderbilt University Medical Center added new treatment clinics to its facilities, which include private flat screen TVs and Holosonics’ Audio Spotlight systems in every bed. Having helped the TV broadcast industry transition from standard to high definition, Brey is now looking forward to telemedicine’s jump to 4K. “The more resolution you have, the more critical it is that you can circle something,” he said, noting that a 4K screen displays 16 times as many pixels as an HD display. “We’re excited as resolution moves forward, and our products accommodate these higher resolutions.”

Earlier this year The Guardian newspaper in the U.K. reported on the world’s first operation to be streamed live in 360-degree video, from Barts Health Trust NHS in London. The surgical procedure, to remove a cancer tumor, was shot using two 360-degree cameras plus additional lenses around the operating room and could be viewed by medical students, trainee surgeons, and members of the public—including the reporter—on a virtual reality headset paired with a smartphone via the Medical Realities website and an app. A one-minute broadcast delay was inserted in case of complications.

The surgeon, Dr. Shafi Ahmed, co-founded the Medical Realities healthcare company. The operation was streamed in partnership with Barts Health and Mativision, an immersive video expert.

“Ahmed said he believes virtual reality, augmented reality, and games could all play a role in training medical students,” according to the article. Two years ago, Ahmed used the Google Glass augmented reality system to present viewers with his point of view during an operation.

The report noted that Ahmed would like to add graphics in order to provide additional information during the operation, even taking questions from viewers.

“[During an operation] I am teaching people, talking to them, there is communication going on—so it’ll be just an extension of that,” he told the reporter, Nicola Davis. “Companies are really working on various gloves or bodysuits and devices so that it can replicate touch and feel,” he added. Haptic devices capable of transmitting physical sensation will likely become more widely available during the next several years, the article stated.

Rather more prosaically, Tech Works, based in Yorba Linda, CA, specializes in audio communications for the healthcare sector, in addition to the correctional and law enforcement sectors, and wider industrial applications. Company owner and founder Mark Dundas, with a 40-year career in audio beginning in the sound reinforcement business, grew Tech Works out of a pastime: “My hobby was implementing my knowledge of acoustics into the development of very, very specialized intercom systems for very specialized applications,” he said. “Audio communications between two challenging acoustic environments is where we shine.”

Tech Works offers communications products for sterile environments. “We built a number of Ebola isolation rooms during that epidemic,” he said, noting that the rooms are standing ready to address the Zika virus. The company’s products are also often found supplementing and integrated with medical digital imaging systems in the OR, he said.

Close-up of an image of a human retina annotated with the Pointmaker during a videoconference. “The question becomes not only economical, but technically where is the best place to do your A-to-D conversion? In a very small environment where you’ve got no distance [such as an OR], you might just as well stay analog. The biggest change today in healthcare delivery in particular is the integration of digital into that environment,” said Dundas, especially VoIP communications.

For example, UC San Francisco wanted to connect an OR to a remote lab via VoIP. “The lab tech is doing a biopsy and the surgeon has a patient open, so they just needed to talk, hands-free,” said Dundas. “We accomplished that. That’s where, today, you need to have the voice as a standalone digital integration.”