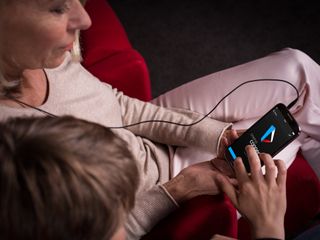 Want to see growth in your systems integration business? Listen up. Consider the particular applications that are ideal for ALDs (assistive listening devices): venues/rooms where it may be difficult for many people to distinguish speech from a variety of noises.

Audio over IP has long been embraced by audio professionals as the dominant method for distributing sound over large areas and in commercial buildings and spaces, noted Andrew Glasmacher, product training manager, Listen Technologies. “Cat-5 is efficient and easy to run, and it allows for multiple channels of audio. A companion to this technology is the integration of smart devices into these audio networks. It makes sense that assistive listening technology would follow the same protocols.”

Assistive listening via Wi-Fi utilizing one’s smartphone or smart device is the technology most poised for growth in many applications, he added. “It was not without its challenges: latency was a major stumbling block. Latency is the delay of a signal reaching the listener, and delay seriously affects intelligibility. Recent advances in Wi-Fi audio technology have reduced latency to an acceptable level making it a viable and practical option when it comes to assistive listening.”

The growing number of Bluetooth-enabled hearing aids on today’s market serves to expand the demand for Wi-Fi audio. “A smartphone or smart device could now potentially stream Wi-Fi audio directly to a person’s hearing aids,” Glasmacher said, “taking advantage of those hearing aids’ customized tuning, and increasing convenience and discreet assistive listening by eliminating the need for the user to wear any other headset.”

Which applications require the technology for ADA compliance?

“In each assembly area where audible communications are integral to the use of the space, an assistive listening system shall be provided,” Glasmacher said, quoting the Americans with Disabilities Act, or ADA. “This typically includes, but is not limited to, classrooms, lecture halls, courtrooms, public meeting rooms, motion picture houses, theaters, and auditoria.”

In fact, compliance goes beyond what the law says; it’s a matter of social responsibility, according to Kevin Stoner, general manager, Media Vision. “Any organization that wishes to convey meaning through audible communication should be aware that a large percentage of the population will not get it without assistance. Advertising the availability of these devices is also the right thing to do, whether the law mandates it or not, because most will not request help and will struggle in isolation.”

The investment, he added, is a small and sensitive one that has a significant benefit to quality of life. “Houses of worship have a true understanding of that, and they are one of our largest user groups. While churches are exempt from the ADA mandates on the provision of assistive listening devices, they tend to have an aging population in need, and proactively, they take the right steps to supply assistance. Not all private facilities are exempt, however. Large corporate training rooms must meet ADA standards, and this is a great thing because in the corporate world disabilities may be more hidden.”

At Sennheiser, new versions of MobileConnect and CinemaConnect apps for accessible streaming allow users to not only adjust volume but also to adapt speech intelligibility and sound quality to their particular requirements. These features were developed in close collaboration with the Fraunhofer Institute for Digital Media Technology.

“With MobileConnect and CinemaConnect, we have developed a new kind of technology for the real-time transmission of audio content,” said Jörn Erkau, managing director, Sennheiser Streaming Technologies. “In the future, cinema and theater goers will be using their own smartphones, which, with our apps, can serve as a receiver for accessibility solutions.”

Sennheiser is advancing the availability of assisted listening solutions for universities with its MobileConnect solution. By offering the ability to live stream audio via WiFi to a user’s own device, also known as Bring Your Own Device (BYOD), the system is ideally suited to academic institutions wishing to quickly and cost effectively enable access to education to hearing impaired students.

“MobileConnect is a disruptive solution that elegantly rethinks accessibility,” said Xenios Maroudas, portfolio manager of business communication, Sennheiser. “MobileConnect utilizes existing network technologies and a BYOD approach. The system thus reduces the total cost of ownership for organizations such as universities by removing barriers to being able to offer a genuinely practical to the needs of hearing impaired students.”

The system’s ConnectStation is a streaming server providing near latency-free multichannel audio streaming over Wi-Fi in auditoriums, classrooms, theaters, and gymnasiums—wherever the campus Wi-Fi is available. The MobileConnect app makes the service intuitive to use and can also be tailored to a user’s particular hearing needs via the Personal Hearing Assistant, allowing users to adjust the volume and to adapt speech intelligibility as well as sound quality.

While many clients are anxious to employ Wi-Fi as a cost-effective way to address their assistive listening requirements, there are some important parts of the ADA that should be considered, Glasmacher cautioned. “First, it is the responsibility of the venue to provide a specific number of assistive listening devices to its customers based on seating capacity. A person’s smartphone or smart device does not count as providing an assistive listening device. There are ways to approach this, however, such as acquiring inexpensive or refurbished smart devices that can be checked out by patrons, if needed. For house of worship applications, it may be possible to ask clergy members to donate old smart devices for this purpose.”