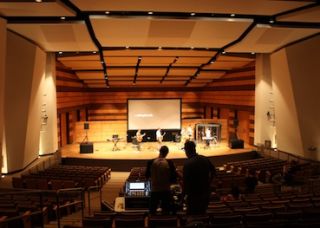 Houses of Worship (HOW) have changed dramatically in the last several decades, and as integrators race to adapt to these architecturally unique installs, they often run into the same challenges. Many pose similar issues due to their old age, massive size, and complex acoustics.

Last week, Matt D. Scott laid out Five Ways Integrators Can Improve Their HOW Business (http://www.avnetwork.com/entry/the-five-ways-integrators-can-improve-their-how-business/774). Today, we’re taking a look at the example set by five notable Houses of Worship that tackled aesthetic and technological challenges to create a sanctuary for clear audio.

Mill City Church is a portable church that operates out of the University Center for the Arts building on the Colorado State University Campus, Fort Collins, CO every Sunday.

It features a DiGiCo SD11 whose compact design is helpful in the complete set up and tear down of the portable system each week.

The DiGiCo SD11 package includes a Digital Snake, a D-Rack, and an Aviom card. This enables church volunteers to drop a rack near microphone sources and run a CAT5e snake to the mixer.

The main concern in adding these new technological elements was maintaining the architectural beauty of the church that the congregation didn't want to see marred by high-tech equipment and its associated wiring and infrastructure.

The new cameras are easily mounted on walls for invisible placement in locations that would be impossible to be serviced by a tripod-mounted camera system. This system allows engineers to both control and switch between the cameras.

Engineers have access to a joystick to move each camera to capture movement throughout the church.

Northview Church services are held in a 2,100-seat auditorium that represents one of Indiana’s most advanced AV facilities thanks to Matrox Video Products Group.

The church features 5.1 surround sound and a lighting infrastructure with intelligent lights. At the rear of the stage is an 80-foot-wide and 30-foot-tall Christie projection screen to display a multitude of backgrounds.

The Northview Church uses and provides feedback on new products from the Matrox Video Products Group. The first essential product the church installed from Matrox was the Convert DVI Plus HD-SDI scan converter. Soon after, the church featured a Matrox MC-100 dual SDI to HDMI mini converter that proved to be equally essential to its operation.

The MC-100 has two inputs and two outputs, with the ability to route any one to any other, send the program signal into one input and then route a camera feed into the other. This allows the church to film custom videos simply with genlock.

The system can feed SDI from the church’s video room to affordable consumer-grade monitors and/or flat screens with DVI or HDMI inputs. These features work well with Northview’s all-SDI infrastructure.

The MC-100 also has 3D processing capabilities. The church has not yet experimented with this capability but has ideas for the future.

This large church seats 1,200 people and houses an ample choir.

In order to carry the sound of the choir throughout the entirety of the massive church, AVE has positioned ChoirMics on the various sections of the choir (soprano, alto, tenor, and bass) so that they are virtually invisible. St. Andrews Lutheran Church also features an Earthworks PianoMic to combat the same purpose.

The Earthworks ChoirMics feed into a Midas Legend mixer through an L-Acoustics KIVA/KILO loudspeaker system at the church.

The non-denominational independent Christian Metro South Church located in the southern suburbs of greater Detroit caters to more than 1,500 people.

The church is 124 feet wide by 124 feet deep, has a 22-foot high ceiling, and seats roughly 850 people. To send sound throughout the large church, a robust sound reinforcement system was needed.

GC Pro, the outside sales division of Guitar Center that focuses on the requirements of professional users, was contracted to design and install Metro South Church’s new sound system. It decided on a loudspeaker setup drawn from the Aero Series 2 catalog of Valencia, Spain-based D.A.S. Audio.

GC Pro installed D.A.S. Aero 12A powered two-way, mid-high line array modules along with LX-215A and LX-218CA sub bass enclosures in the church.The system is composed of fifteen D.A.S. Audio Aero 12A enclosures, with six elements each on the left and right hangs and a center fill cluster consisting of three modules.

Low frequency support is provided by a combination of two D.A.S. LX-215A powered band-pass subwoofers and eight LX-218CA high performance powered subwoofers. The subwoofers are stacked on both sides of the stage in a cardioid setup with some turned around for maximum sound quality. Each of the three loudspeaker clusters is able to run on a single 15-amp circuit.