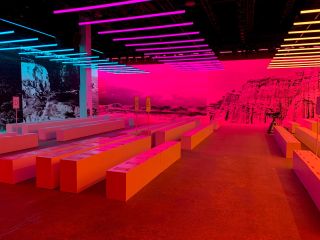 In order to illicit a more emotional response from the audience, the Zimmermann team worked with lighting specialists Enlumen to create an immersive lighting solution that accentuated the signature pastel colors of its new collection. To meet these goals, Enlumen designed and installed a Martin by Harman lighting solution featuring VDO Sceptron 10 linear LED video fixtures.

“We were hired to create an atmosphere to match the design that the Zimmermann team created for their spring 2020 line,” said Shawn Kaufman, lighting designer, Enlumen. “We had three arrays of Sceptron fixtures hanging over the audience, all working cohesively to create color and effects. They wanted a very strong feeling of color throughout the whole space. Throughout the show, the tubes cycled through solid colors, matching the main color theories of the collection. There were a few times where people came in while we were doing some editing and the color was so intense that they wept. We dialed some of the colors back because there was such a direct emotional response.”

“The colors and the feel of the lighting was in conjunction with the overall production design of the runway show itself,” added Kaufman. “The colors were originally done as fabric, so we had to translate them into light. We've worked with the Sceptrons a number of times on other projects. The fact that they have building blocks allowed us to connect them together and create the precise layout we were looking for, from the connectors to the diffusing lenses. The ability to use different diffusers to homogenize the color and pixel so you actually see them as a single source was also appealing to us.”

After nearly six months of preparation and a five-day installation process, Enlumen was able to achieve the desired results with resounding success.

“The Zimmermann team was thrilled with the results,” said Kaufman. “They were ecstatic—the overall setting was exactly what they were looking for. Comparing this to our renderings, they were shocked. The renderings looked exactly like the reality. On top of that, everything worked flawlessly.”