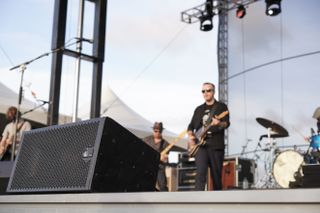 The 17-day Savannah Music Festival is moving up in the world of cross-genre musical celebrations, easily ranking as the largest music-oriented arts event in Georgia and drawing audiences from all 50 states and many European countries. The 2018 edition wrapped up in mid-April, and for the fourth consecutive year all amplified music venues—featuring a varied mix of jazz, world ethnic and American roots styles—were equipped with systems from Meyer Sound. Also, for the first time, the festival was capped with a gala outdoor finale, this year headlining three of the biggest draws in Americana music: The Tedeschi Trucks Band, Jason Isbell and the 400 Unit, and Gillian Welch.

''Once we started working with Meyer Sound, everybody got completely spoiled by the quality of what they heard,'' said Rob Gibson, the festival’s executive and artistic director. ''And, because of all the different styles of music we present, we needed versatile systems that work for any musical genre.''

A cross-section of artists heard through the various Meyer Sound systems installed this year at the six stages includes Rhiannon Giddens, the North Mississippi Allstars, Béla Fleck and Abigail Washburn, Rosanne Cash and John Leventhal, Pat Martino, and Bill Frisell. As with the three previous festivals, all sound systems were supplied by Rock-N-Road Audio of Atlanta under the supervision of Roy Drukenmiller.

'To me, the main benefit of Meyer Sound is the transparency,'' explained chief sound engineer Chris Evans. ''What we put in is what we get out, with no coloration from the boxes. That’s particularly true of the LEO Family, which, for me, has been a real game-changer. It’s a huge step forward. You can try to explain the difference, but you really have to hear it, and when you do you’ll notice the difference immediately.''

LEO Family also was at work indoors throughout the festival, with the system in the Lucas Theater anchored by 16 LEOPARD line array loudspeakers with lows augmented by four 900-LFC elements. A system of M’elodie line arrays graced the Trustees Theater, point-source systems based around UPQ-1P served up sounds at Ships of the Sea and Morris Center, and JM-1P loudspeakers amplified all acts performing at the outdoor second stage.

''The great thing about working with Meyer Sound is that artists and engineers all love the systems,'' summarized Rob Gibson. ''Sound is of paramount importance for an artistic festival like ours, and Meyer Sound connects people through music in a holistic and meaningful way.''