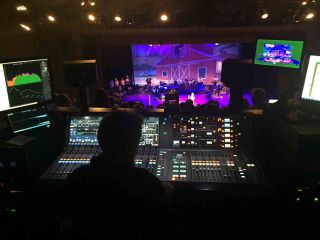 Nashville’s 2,300-seat Ryman Auditorium recently purchased two Yamaha RIVAGE PM7 Digital Audio Consoles, installed by CLAIR Nashville. “We were very pleased with the Yamaha PM10 monitor console installation at the Opry House,” said Jeff Hatfield, director of technical services for Opry Entertainment Group. “Based on our experiences with the PM10, we were confident with our decision to add the dual PM7 consoles, and without a formal demo, due in part to Yamaha console familiarity and reliability.”

Les Banks is the house mixing engineer at the Ryman and Kevin McGinty is the primary Opry show front of house engineer when the Grand Ole Opry show comes to the Ryman during the winter months and for the Thursday night Opry Country Classics shows. “Our Opry monitor engineer, Bob Bussiere, had such positive experiences with the PM10 at the Opry House, that the PM7 was a natural choice,” said Hatfield. The engineers are both using the on-board Premium effects, SILK feature, and Dante networking.

“As far as the Opry is concerned, the Yamaha RIVAGE most important feature is its thorough file management capabilities,” said Kevin McGinty, front of house engineer. “Ultimately, we will have hundreds of artist scenes, and on a nightly basis, we need to arrange these scenes into an eight to twelve artist event list. While we may see certain performers frequently, we may not see them for several years, and we also have a rotating stable of Opry band musicians. It's critical to be able to manage these scenes globally to prevent any unpleasant surprises as we make input and patch changes to our show. Scene Focus, Recall Safe, and Global Paste are all tools that enable us to keep everything in hand, even as the Opry show evolves.”

McGinty said his PM5D Opry file was 12 years old when they retired the Ryman console. “This is pretty remarkable considering how many changes we went through over that period. With the Yamaha PM7, I can continue to employ this flexibility. I have also become a fan of the Dynamic EQ on Yamaha products over the years, useful tools in keeping the mix comfortable for audiences.”

“The console is also very familiar to users of Yamaha mixing products, McGinty said. “As powerful as it is, it still employs Yamaha conventions that are familiar to most engineers. I was able to build a file on the RIVAGE PM Editor and touch up some things using Virtual Soundcheck with a recent Opry multi-track. And then finally, jump right into the performance without incident. The PM7 also saves space by integrating the DSP unit into the control surface. Storage space is scarce at the Ryman, and the monitor position needs to be removed and stored frequently; there just isn't room for an additional DSP rack.”

Banks said choosing the PM7 for the Ryman’s next console was an easy choice. "The Ryman has had the Yamaha PM5D at both ends of the snake for over the last 10 years,” said Banks. “When Yamaha launched the RIVAGE, we watched the industry take notice. Then, the Opry House purchased the PM10 and gave it the thumbs up! Bottom line is that the PM7 is user friendly, rider friendly, has great tech support from the Yamaha team, and sounds great!”