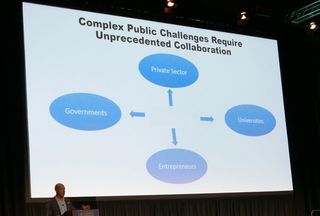 What’s the new frontier in AV? Well, let’s put aside VR and AR for the moment– those technologies are great but they are indeed a new technology to bring to the market, not a new market per se. There is a new market that does hold huge promise for all the technologies we cover. It’s called Smart Cities– the use of technology, policy, data, and more to help cities become more efficient, secure, and sustainable–while improving the quality of life of its citizens and visitors.

I’ve reported on some important Smart Cities conferences this year. First at SXSW in Austin– what better place to get a taste of an important new technology market than SXSW Interactive. SMART CITY DAY @ SXSW featured a series of lightning talks– from mayors, city technology officers, solution providers, and entrepreneurs who were tasked with showing what they are doing, what works, what is needed, and what is to come for the Smart City. A long list of experts on both the user and provider sides gave updates on top tech trends–the Internet of Things (IoT), big data, autonomous vehicles, 5G, connected buildings and homes, smart grids, and more. They explained how these initiatives are impacting cities, in terms of mobility, affordability, energy, sustainability, access to healthcare and education, citizen engagement, and the digital divide.

And fast forward to summer 2017: The Smart Cities Connect Conference and Expo/US Ignite Application Summit, that took place the week before the long July 4th weekend, saw 1800 attendees converge in Austin, from 27 countries. 300 cities were represented (with city officials from mayors to data, policy and tech executives). There were live application demos, an expo section with 150 exhibitors, including 50 startups & innovators pitching their emerging tech solutions for cities. It was a unique mix of analytical sessions, formal presentations, panel discussions, demos of technology solutions, demos of prototype solutions such as robots and transparent (digitally) cars. The atmosphere was a cross between a government conference, a tech expo, and a high-level university/research facility dive into future technology.

Why is the Smart Cities market important for our industry? Because it’s the future– not only the future of our industry but our future, period. UNICEF estimates that 70% of the world’s population will live in cities by 2050. On the business side the market research firm Frost & Sullivan estimates the Smart Cities market will generate $1.5 trillion dollars by 2020. From our report in this issue, it’s clear that all the technologies we cover will be brought to bear as we all try to make our growing cities more manageable, more efficient, and more prosperous. And that’s good business for all involved.

The biggest smart cities event on the calendar, conference-wise, for the remainder of 2017: the Smart Cities Expo World Congress, November 14-16 in Barcelona, Spain.

Also, a variety of video and other technologies for smart cities will be showcased at the GV Expo, to take place in Washington DC November 28-30.