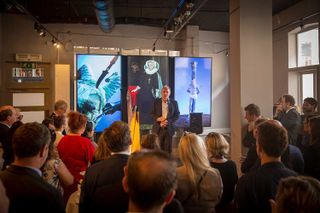 The National Gallery and King’s College London jointly launched National Gallery X (NGX), a collaborative research and development (R&D) program that will explore the potential of new technologies for galleries in the future.

NGX is an ambitious project at the forefront of digital innovation. The research partnership builds on a rich and long-standing relationship between the National Gallery and King’s, with both institutions having a strong commitment to artistic, educational, and curatorial expertise. NGX will hold a series of residencies and short-term interventions from artists and thinkers that will run throughout the year.

Sitting next to the National Gallery, the NGX studio will explore how technological inventions can be applied to cultural institutions in the future, informing new kinds of cultural experiences over the next decade. It will combine key immersive technologies, including large screen video, digital projection, audio, motion capture, and virtual reality, along with access to experimental technologies in development at King’s.

The first of the interventions was unveiled in August, as the studio was taken over by an immersive audio response to Joseph Mallord William Turner’s Rain, Steam, and Speed - The Great Western Railway, using technology developed by Zoran Cvetkovic, professor of signal processing at King’s College London, and set to music by composer Peter Wiegold.

"What will the museum of the future look like and how will technology been integrated into it," Dr. Gabriele Finaldi, director of the National Gallery queried. "National Gallery X will allow us to explore these fascinating and fundamental questions with some very smart partners, academics, artists, curators, and technological innovators."

"This is an exciting partnership with the National Gallery—one that builds on our shared vision for innovating and communicating in the arts, technology and humanities," added Professor Evelyn Welch, provost and senior vice president (Arts and Sciences) at King’s College London. "The NGX will build on our creative collaborations at the intersection of culture, the digital creative Industries and King’s research, allowing students and researchers to think differently and critically about art and the ways we access and engage with it."

The National Gallery also announced two residencies. The first NGX residency will feature art collective the ANALEMA Group who will take over the space in early 2020. ANALEMA create immersive, participatory experiences which explore the visual, spatial, and acoustic elements of sound. At NGX they will explore how the colors used in Gallery works can be turned into sound, drawing on mathematical and technical research carried out by King’s academics.

The second residency is with MIMA, The Middlesbrough Institute of Modern Art, which will explore how emerging mobility and telecommunications technologies might create new kinds of physical access to museums for diverse, disabled, and neuro-diverse audiences. This project will be led by artist Simon McKeown, reader at the MIMA School of Art and Design, part of Teesside University. This residency responds to the Gallery’s commitment in DCMS’s Culture is Digital policy to help develop the digital capabilities of museums across the country.

The Gallery further announced an open call which will be launching in November for residencies that will develop work using responsive environments, tactile and kinetic engagement, NUI (natural user interface), and BCI (brain-computer interface).