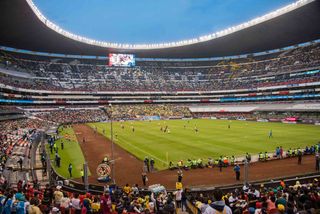 "We approached Meyer Sound for this new system simply because they offered us the best solution," said Azteca Stadium Audio Manager Alejandro Aguirre. "We needed the latest in technology, and the CAL system with AVB fulfilled all our requirements."

For the lower ring, the system deploys 24 CAL 64 loudspeakers along with 10 600-HP subwoofers for low frequency extension. The upper ring is covered by 26 CAL 96 and eight CAL 64 loudspeakers, with one additional CAL 96 covering the playing surface. Two GALAXY 816 network processors are placed at the head of the system for overall optimization, and two RMServers are inserted in the network for comprehensive status monitoring and troubleshooting.

The GALAXY 816 master processors are connected to the control room master switch via AVB/TSN, with bi-directional signals routed over a fiber optic network from the control room switch to the 11 local switches distributed around the stadium. Each local switch connects to its assigned group of CAL loudspeakers via Cat-5e cable. All switches are Extreme Networks X440-G2 series.

"The stadium hosts a variety of events, not just association football," said Aguirre. "We also have concerts, religious events and the annual NFL games. It was essential that we have intelligible audio in every seat, and with the power and clarity needed to deliver a complete watching and listening experience alongside the HD screens. All of this has been fully accomplished with the new Meyer Sound system."

Aguirre acknowledges that the complete solution depended on design and support as well as the latest in technology. "The Meyer Sound team studied every detail, and they made sure the right people were on the project,” said Aguirre. “They advised us at every step. There is a level of commitment from Meyer Sound that sets the company apart from others in the industry."

Designed by architects Pedro Ramírez Vázquez and Rafael Mijares Alcérreca, the main structure of Estadio Azteca was completed in 1966. It had a peak capacity of 115,000 in 1986, but safety restrictions and eventual replacement of seating with VIP boxes have since reduced overall capacity. The Mexican media company Grupo Televisa owns both the stadium and its principal user, the Club América association football team.