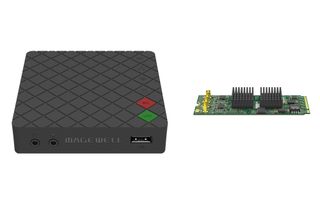 At the IBC2018 exhibition, taking place September 14-18 in Amsterdam, Magewell's theme will be showcasing how its latest innovations extend its product lines “beyond capture” into other critical signal processing functionality. Magewell will exhibit in stand 8.A84.

Users can stream to popular services including YouTube, Facebook Live, or Twitch, or to a custom-specified server, and can record video as files to a directly connected USB drive or the associated smartphone. The device encodes video up to 1080p60 from an HDMI input and also supports 4K sources, down-converting them automatically to HD.

Magewell will also provide a sneak preview of new solutions that bring the company’s hardware and software benefits to IP-based production infrastructures, bridging traditional video signals with live, network-based media transport. More details will be shared closer to the show.

In addition to these IBC premieres, Magewell’s exhibit will feature established and previously announced product lines, including:

“While we continue to expand and enhance our popular capture card families, our newest offerings are designed to bring our hallmarks of exceptional performance, quality, reliability, and simplicity to other critical functions in acquisition, production, and distribution workflows,” said Amy Zhou, sales director at Magewell. “We look forward to introducing these new solutions to international attendees at IBC2018.”