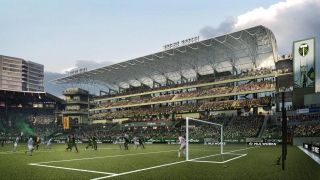 The installation encompasses five video screens aimed at heightening the fan experience when Providence Park reopens this summer, highlighted by a signature new LED board/scoreboard behind the south goal that features more than 150 percent additional display area. The home venue for both the Timbers of Major League Soccer and Thorns FC of the National Women’s Soccer League is in the final stages of a multiphase, $85-million transformation that includes extensive enhancements to the entire stadium. Notably, the project includes the addition of approximately 4,000 new seats as part of a new three-tiered seating structure constructed on the east side of the stadium.

“From the moment fans enter a stadium on game day, to the time they leave once the game is over, in-house video capabilities play an important part in the overall in-game experience at any sports venue,” said Mike Golub, president of business for the Timbers and Thorns FC. “We are thrilled to be working with the local partnership of Leyard and Planar on this substantial investment that will greatly enhance the already unique and immersive experience at Providence Park.”

The installation is the first resulting from the new Leyard and Planar, a Leyard company-Lighthouse partnership announced in December 2018. By combining Leyard’s fine-pitch LED and Planar’s LCD offerings with Lighthouse’s LED solutions designed for the sports market, the goal is to offer new innovations to sports and entertainment customers across North America.

“We are pleased that the Portland Timbers and Portland Thorns FC chose us for this first important installation right in our own backyard,” said Douglas Moss, general manager for sports and entertainment at Leyard and Planar. “The project is an example of the transformative experiences that can be achieved in the sports and entertainment market when two major LED companies work together. We believe it will be the first of many innovative installations to come.”

“We are excited to be working with Leyard and Planar on this first project,” said Peter Chan, managing director of Lighthouse. “The strengths of our two companies will ensure that exceptional LED video screens experience will be delivered to the Portland Timbers and Portland Thorns FC.”