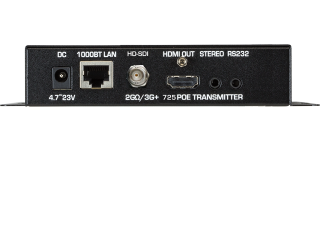 Just Add Power (J+P), a specialist in Ultra HD over IP, announced that it will debut the new 725POE 2GΩ/3G+ SDI Power over Ethernet (PoE) transmitter alongside the new rackmount 3G Ultra HD over IP PoE transmitter and award-winning 3G+4+ Tiling Transmitter at InfoComm 2018, June 6-8 at the Las Vegas Convention Center, in booth N464. The company will also host Luxul, the leading innovator of IP networking solutions for AV integrators, and demonstrate the ultra-low video latency achievement of its 3G Ultra HD over IP Series.

"Our ultimate goal is to allow everything to play anywhere with record-low latency, even as formats evolve and as installation requirements vary from job to job and room to room," said Taft Stricklin, sales team manager at Just Add Power. "To make that possible, we've expanded our award-winning, third-generation line with a new HD-SDI transmitter, a four-input rackmount transmitter, and the industry's first 4K tiling transmitter. These are all building blocks that integrators can mix and match to create a seamless, cost-effective, and custom video distribution system that delivers reliable, high-quality video with 16-ms latency from source to screen — all over an IP infrastructure."

Also being displayed at the show will be the new 4K UHD rackmount transmitter, the VBS-HDIP-747. It provides the same features and benefits as the budget-friendly, compact VBS-HDMI-707 PoE TX. Both models distribute 4K video with HDR support to seamlessly meet ultra-HD requirements. They also feature HDCP 2.2, optional 4K to 1080p scaling at the display location, two-way RS-232 and IP control, and support for all audio formats up to and including Dolby Atmos and DTS:X.

The J+P 3G Ultra HD over IP transmitters family of transmitters also includes the VBS-HDMI-717HIFI PoE TX, VBS-HDMI-718AVP PoE TX, and rackmount VBS-HDMI-749AVP TX. The 718AVP and 749AVP distribute UHD and 4K video to every zone over a single Cat-5e cable along with Dolby Digital 5.1 audio, and transform the signals to stereo audio for two-channel zones. This complete lineup of devices enables integrators to mix and match J+P devices to fit their hardware and budget requirements on 4K HDMI projects.

Finally, attendees will also see J+P's 4K network video tiler, the 3G+4+ Tiling Transmitter. It's the industry's first transmitter capable of displaying four 4K signal sources on a single screen instantly. Added to the J+P Ultra HD over IP matrix switching system, it enables users to simultaneously watch four 4K video sources in multiple formats, including single-screen, video wall, or tiled video. It is an incredibly flexible device that can be applied to any size commercial installation requiring multiview functionality, providing video support for resolutions up to full 4K HDR compatibility. Once tiled, the video feed can be distributed to an unlimited number of screens, making it the ideal solution for commercial spaces and any size video wall configuration.