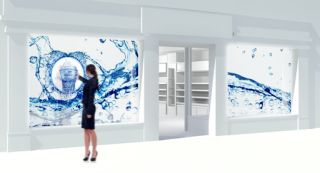 Branded Shop Window
Unfortunately, at the time, the barriers to fashioning such creativite were immense: the creative industry lacked broadband, serious mobility, sensors and beacons, and affordable signage options. Creative life before Wi-Fi, HTML5, LCDs, and iPhones was limited.

Advertising Today
As predicted, advertising has become more about the creation of services, platforms, and social moments. The best of these strategies meet unfulfilled needs in the moment, right then and right there, as opposed to delivering static messages and billboards to be acted on at some later, uncertain time. This trend has been accelerating for 20 years and is the reason why major ad agencies are starting to worry that their clients are considering leaving Madison Avenue for product and business strategy companies like Deloitte and IBM. “Digital Transformation” in itself is the new advertising: creating apps and customer-service experiences that can anticipate needs and support both individuals and communities at scale. This "App Generation" has created and lives on entirely new platforms that enable the voice and input of the customer to shine through and be amplified. We have all awakened to the idea that lifelong customers are ones that are empowered to control a part of their relationship with a given brand and personalize that relationship. To do this takes technological savvy and a willingness to meet the customer on their terms. Advertising’s new darlings are therefore technologists, not copywriters. Yes, content is still king, but it rides along on an ocean of multi-channel delivery, personalization, and predictive analytics.

Cities as Networks
A city is, of course, composed of its citizens, architecture, and infrastructure, yet at its core it’s fundamentally a network. In the past much of the needs of this network were mysterious and hidden: traffic jams, subway delays, concerts in the park, flash floods, and, importantly, public sentiment. The city was opaque. It was hard to understand what was going on under the surface or to get the word out since the City was not yet “aware of itself,” monitoring the welfare of its citizens, architecture, or infrastructure and how they are inter-related. This was due to a lack of cost-effective technologies, a situation that has been consistently changing over the past several years. As more Internet of Things technologies and analytics systems are deployed across cities over the coming years, the capacity to leverage their new "digital halos" will increase, allowing them to anticipate, maintain, and adapt to changing conditions. These are today’s macro trends all coming together: IOT, mobile culture, predictive analytics and machine learning, smart environment design, digital signage, and advertising.

Convergence into the Future
Sensors will soon be everywhere and sensor-enabled displays will be hooked up to cloud-based systems that leverage real-time predictive analytics to push their “media” and content upon larger, more affordable high-resolution displays. Factors such as weather, time of day, volume of foot traffic, news events, sentiment (as measured by expressions), gender, race, and a wide variety of other variables that constitute near omniscience, will advance current digital media purchasing models. With costs progressively coming down and new technologies being constantly introduced, it’s only a matter of time before architectural structures themselves will be literally alive with branding and messaging across their exteriors. The building will become the advertising platform. In fact, advertising may partly offset the ballooning costs to build them in the first place.

A simple recent example of this emerging intersection of trends was the ubiquitous phenomenon of Pokémon Go this past summer. A wholly new gamified experience was released that worked precisely because it was within the geo-targeted spaces where we live and work. It was immersive advertising for Nintendo, performed on an epic scale. When a stock generates 7 billion dollars of value in a week I think it is safe to say we can expect more of this kind of thing in the future. In the end, what is that high-resolution display on smartphones but another real-time interactive billboard?

1:1 Marketing will remain critical based on the city/advertiser recognizing our faces and/or phone signatures, but this will be “opt-in” as privacy will remain a chief concern of the populace. Brands that cross the line will be vehemently attacked. Starbucks rolled out proximity marketing programs five or six years ago using geo-location and smartphone notification settings, acceptable because their customers were already loyal to the brand. These tactics will only work as a preference, not as the dystopian spam attack seen in films. The march forward will continue regardless of privacy advocates and resistance: Google is testing a payment system based on facial-recognition and voice authorization so we don’t even have to touch anything to transact. Convenience will always win the day. Inside or out, we’ll be able to simply talk to digital signage to have things shipped to our homes, or delivered straight to the park we’re visiting by drones, payments frictionless and secure.

Layered on top of all the things already discussed will be even more immersive innovations. “Mixed reality” advancements such as Microsoft’s recent Hololens release, place high-resolution holograms in the real world. Infusion has already executed brand experiences on the platform for Budweiser for their wise-cracking “Shock Top” character. Museums and stores will be enhanced with an additional meta-layer of experience and data, visible only to those with the right technology to view it all. Cities will therefore be comprised of both unique virtual as well as physical features, those virtual spaces providing an incredible exponential and lower cost way of expanding the amount of real estate by which to communicate a message or start an interaction with customers. Advertising integrations within video games have been with us for quite some time, but the trick here will be that our entire actual world can now have some aspect of advertising layered within it. Why not show a targeted 15-second spot while someone waits for a traffic light or stands in line at the airport?

Many of these things are possible today, and some cities are already aggressively rolling out aspects of this vision, especially around monitoring and automation of certain functions. They are checked only by budgets, imagination, and buy-in. When more civic leaders see the benefits that advertising may bring them--reimagining the city as a potential new revenue channel in itself--more of these efforts will gain traction and go live.

Author Peter Rivera will co-present the webinar discussion entitled, “How Advertising is Expected to With Smart & Connected Cities” when the DigitalSignageConnection.com presents its 30-minute webinar on Thursday, January 26 from 2:00-2:30pm EDT. Peter is a member of the Digital Signage Expo Advisory Board’s Advertising Council, which addressed the question of Smart Cities last fall. His and other Advisory Board answers can be found at http://www.digitalsignageconnection.com/ask-board-smart-city-advertising.