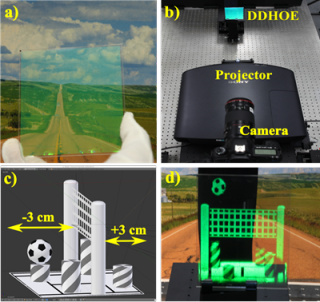 While most interaction with digital content is still constrained to keyboards and 2-D touch panels, augmented, and virtually reality (AR/VR) technologies promise ever more freedom from these limitations.

AR/VR devices can have their own drawbacks, such as a tendency to induce visual motion sickness or other visual disturbances with prolonged usage due to their stereoscopy or auto-stereoscopy based designs. One promising solution is to adapt holography or light field technology into the devices instead. This, however, requires additional optics that would increase the size, weight, and cost of these devices — challenges that have so far prevented these devices from achieving commercial success.

Now, a group of researchers in Japan and Belgium has begun to explore a combination of holography and light field technologies as a way to reduce the size and cost of more people-friendly AR/VR devices. They will present their work during The Optical Society’s (OSA) Frontiers in Optics meeting, Sept. 16-20, in Washington, D.C. One of the themes of the meeting is virtual reality and augmented vision, with both a visionary speaker and a series of invited talks on those subjects.

“Objects we see around us scatter light in different directions at different intensities in a way defined by the object’s characteristic features—including size, thickness, distance, color, texture,” said researcher Boaz Jessie Jackin of the National Institute of Information and Communication Technology in Japan. “The modulated [scattered] light is then received by the human eye and its characteristic features are reconstructed within the human brain.”

Devices capable of generating the same modulated light — without the physical object present — are known as true 3D displays, which includes holography and light-field displays. “Faithfully reproducing all of the object’s features, the so-called ‘modulation,’ is very expensive,” said Jackin. “The required modulation is first numerically computed and then converted into light signals by a liquid crystal device (LCD). These light signals are then picked up by other optical components like lenses, mirrors, beam combiners, and so on.”

The additional optical components, which are usually made of glass, play an important role because they determine the final performance and size of the display device.

This is where holographic optical elements can make a big difference. “A holographic optical element is a thin sheet of photosensitive material—think photographic film—that can replicate the functions of one or more additional optical components,” said Jackin. “They aren’t bulky or heavy, and can be adapted into smaller form factors. Fabricating them emerged as a new challenge for us here, but we’ve developed a solution.”

Recording, or fabricating, a hologram that can replicate the function of a glass-made optical component requires that particular optical component to be physically present during the recording process. This recording is an analogue process that relies on lasers and recording film; no digital signals or information are used.

“Recording multiple optical components requires that all of them be present in the recording process, which makes it complex and, in most cases, impossible to do,” said Jackin.

“The idea is to digitally compute the hologram of all the optical functions [to be recorded and] reconstruct them together optically using a LCD and laser,” said Jackin. “This reconstructed optical signal resembles the light that is otherwise modulated by all of those optical components together. The reconstructed light is then used to record the final holographic optical element. Since the reconstructed light had all optical functions, the recorded hologram on the photosensitive film will be able to modulate a light with all of those functions. So all of the additional optics needed can be replaced by a single holographic film.”

In terms of applications, the researchers have already put DDHOE to the test on a head-up light field 3D display. The system is see-through, so it’s suitable for augmented reality applications.

“Our system uses a commercially available 2D projector to display a set of multi-view images onto a micro-lens array sheet—which is usually glass or plastic,” said Jackin. “The sheet receives the light from the projector and modulates it to reconstruct the 3D images in space, so a viewer looking through the micro-lens array perceives the image in 3D.”

One big difficulty their approach overcomes is that light from a 2D projector diverges and must be made collimated into a parallel beam before it hits the micro-lens array in order to accurately reconstruct the 3D images in space.

“As displays get larger, the collimating lens should also increase in size. This leads to a bulky and heavy lens, the system consuming long optical path length and also the fabrication of the collimating lens gets costly,” said Jackin. “It’s the main bottleneck preventing such a system from achieving any commercial success.”

Jackin and colleagues’ approach completely avoids the requirement of collimation optics by incorporating its function on the lens array itself. The micro-lens array is a fabricated DDHOE, which includes the collimating functions.

The researchers went on to create a head-up, see-through 3D display, which could soon offer an alternative to the current models that use the bulky collimation optics.