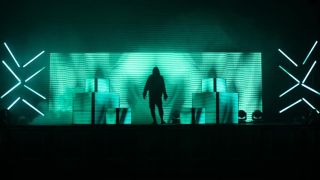 Hippotizer Media Servers were recently chosen to drive the visuals for the Cyber-Gen ShockWave Tour. Featuring a lineup of Deutsch-rap and R&B artists signed to the Cyber-Gen music label, including YouTube stars TJ Beastboy, Young Mokuba, Wavvyboi and others, the tour played dates in Germany, Austria, and Switzerland and sold out in under 28 hours.

Lighting designer Otto Schildknecht asked Emanuel Jörgner to program and operate the show’s video and lighting elements. “Because we needed a high-performance server, which would ensure all the live notch FX ran smoothly, we chose the Boreal+,” Jörgner said. “The other good reason for choosing the Boreal+ was the fact that we could deform the content with the FX library.”

The display setup consisted of an 8m x 2.3m, 16mm pixel-pitch LED wall positioned upstage, with alternative configurations for shows in the smaller venues on the tour. “Besides the LED wall, we integrated eight Astera AX-1 PixelTubes on each side of the screen,” Jörgner said. “In special parts of the show we used the Hippotizer’s PixelMapper to map the video content to the PixelTubes.”

Jörgner merged ArtNet data from both the Boreal+ unit and the lighting console to control the PixelTubes, providing a wide range of effects possibilities.

In addition, the stage set featured custom-made cubes of 4mm pixel-pitch LED panels. Each visible surface was mapped with a variety of video content and effects, while content was also fed to the top sides of the cubes for a complementary uplight effect. “The PixelMapper was perfect for the LED cubes’ surfaces,” Jörgner said. “This gave us the ability to handle each surface like a simple LED-PAR.”

The visual content consisted of a mix of music videos and individual clips provided by the artists. “They gave me the freedom to play around with the clips so that I could add some unique effects to them,” Jörgner said.

Both video and lighting were mostly triggered by SMPTE timecode. However, the Media Servers were connected separately from the lighting console, which Jörgner said was useful in enabling the flexibility required for such a video and light show, with both synchronous and independent elements.