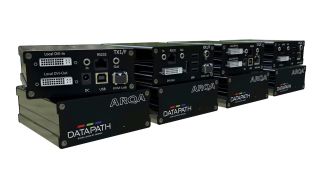 The What: Datapath has announced Arqa, a new KVM system designed to further enhance control and management of Datapath’s video processing hardware.

The What Else: The Arqa KVM system utilizes a highly optimized video-over-IP transport technology that reduces latency and provides instant control. Rigorous testing reveals no difference between operating a PC via Arqa, or having the connection direct to a local desktop, according to the company.

The convenience and benefits of KVM control is becoming increasingly necessary to control room architectures as security concerns increase and AV/IT teams aim for a more streamlined management process. Using Arqa, maintenance teams can have all PCs housed in a single location—saving time, desktop real estate, as well as keeping hardware secure.

“Operators tend to interact with multiple sources or applications simultaneously, which are often hosted remotely for a number of good reasons,” said Mark Rogers, Datapath product manager. “Obviously, being able to respond quickly during a crisis is critical, meaning the latency and responsiveness of their video system is a key factor. With encoding technologies like H264, PCoIP, or RDP, the latency can be too high or the quality too unpredictable, so these are not good choices where real-time control is concerned.”

Furthermore, if the source itself is using software-based KVM to encode its desktop then it is using its own resource to do so, which takes resource away from the application itself. “Users want a solution that is reliable and doesn’t compromise on either quality or latency,” Rogers said. “Arqa is a visually lossless KVM that runs on a 1Gb network with simple and cost-effective networking hardware.”

Another benefit for end users is Datapath’s One Control technology, which lets operators seamlessly switch between up to 16 independent sources as if they were one desktop with no button presses required to switch. Since the system behaves essentially as an IP matrix switch, users can have up to 2,000 endpoints in the system to choose from.

The Bottom Line: Adding to the company’s portfolio of video management solutions, Arqa from Datapath is designed to provide the convenience and benefits of KVM control with reliability. With near-zero latency and visually lossless video transmission, Arqa brings numerous benefits to both end users and integrators.