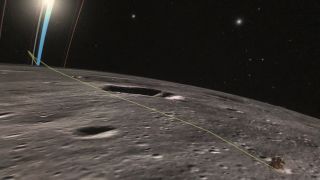 To help look back 50 years on one of mankind’s greatest achievements, the American Museum of Natural History (AMNH) is unveiling one giant leap for projection technology.

On Saturday, July 20, on the anniversary of Apollo 11’s historic moon landing, the New York museum is hosting SpaceFest with a series of events celebrating space exploration. Capping off the day will be a presentation of moon mission simulations in the newly renovated Hayden Planetarium, which now features six Christie Eclipse RGB laser projectors that were developed in collaboration with museum directors, who say they feature the highest contrast ratio ever achieved in a projector for this purpose.

“The Hayden dome, which recently underwent a major upgrade, is now outfitted with a high dynamic range projector system that is the first of its kind in a planetarium anywhere,” said Ellen Futter, president of the AMNH. “The projectors’ contrast ratio went from 7,000:1 to greater than 1,000,000:1, which means that visitors will see both the brightest and darkest images in the universe as never before, making the Hayden not only the most advanced planetarium in the world, but also the most advanced planetarium ever attempted. So, prepare to be dazzled.”

The event features 3D simulations built with OpenSpace visualization software, which uses NASA mission data to model the flight path the Apollo astronauts took to the moon. The presentation flies guests down to a richly detailed a lunar surface rendered with high-resolution satellite photos of the landing sites, where details such as the shadows of the lander base and footprints of the astronauts in the soil are visible. From there, it’s off to explore Mars.

These voyages through space are rendered all the more lifelike by the new projection system and low-gain screen, which dramatically enhance the lighting dynamics between illuminated celestial bodies and the inky blackness of the void.

According to Larry Paul, executive director, technology and custom solutions, enterprise and entertainment at Christie, the Eclipse projector line was developed in close partnership with the Hayden Planetarium, beginning in 2015. In a truly light-controlled environment, they are capable of 20,000,000:1 contrast. Now that the projectors are installed, the museum is developing HDR content specifically for the system. These presentations are expected to debut in January of 2020.

“We have an amazing team of engineers at Christie that have worked tirelessly on making this right, and just getting all the details and trying to nail down everything, because it matters,” Paul said. “Because the Hayden Planetarium, more than anyone else, can take people on a journey into space with absolutely incredible details in the depth of space. Not just to the moon, but way beyond, to the ends of what we’ve observed. And seeing the darkness is something that has never been possible before. It’s those subtleties and details—that’s where outer space really lives.”