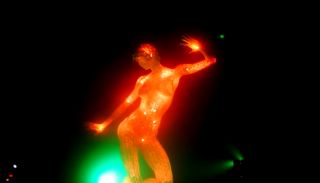 Christie has donated a 1DLP laser projector and lens to a new large-scale exhibit called “No Spectators: The Art of Burning Man,” which opened at the Smithsonian American Art Museum’s Renwick Gallery in Washington, D.C. on March 30.

Each year in Nevada’s Black Rock Desert, a city of more than 75,000 people rises out of the dust for a single week. During that time, enormous experimental art installations are erected, many of which are ritually burned to the ground. “No Spectators: The Art of Burning Man” brings the large-scale, participatory works from this desert gathering to the nation’s capital for the first time.

Six major artworks are erected in adjoining streets and Five Ton Crane, an Oakland, California-based industrial arts collective, is one of three featured artists contributing to the larger group exhibit running until September 16, 2018 (with some works remaining on exhibit until January 21, 2019.

David Shulman, co-founder of Five Ton Crane, said, “Art cars have come to play a big role within the ‘Burning Man’ culture and the Renwick Gallery invited us to build a ‘mutant vehicle’ for this exhibit. Our concept is a 1920s Art Deco movie palace on wheels—in essence, an open air ‘drive-in movie theater’ and performance space. There are three rows of seats, a concession stand, candy and popcorn, and ticket booth, all done in our own version of 1920s style. Additionally, our exhibit is fully modular, allowing for the mutant vehicle to be built and then re-assembled inside the main first floor gallery.”

The Christie projectors power a series of black and white silent movies created by lead artist Bree Hylkema, which show on the screen throughout the Five Ton Crane exhibit.

“I am delighted that Christie agreed to support our creation through this donation,” said Shulman, who was already familiar with Christie’s visual technology through his role as chief financial officer of Obscura Digital. “Christie DWU850-GS projectors are the perfect solution for our art creation because Christie’s laser illumination eliminates the need for lamp and filter replacements and provides 20,000 hours of low-cost operation.”

“We needed something that could last for a long time, with little maintenance, that were powerful enough to withstand running 10 hours a day for six months—and that’s where Christie came in,” added Sean Orlando, co-founder of Five Ton Crane. “In the marquee, there is a monkey’s head, which was inspired by Hanuman, the monkey god, and his mouth is open. From the inside of the monkey’s head comes the beam from the Christie projector; it looks really cool.”

“We’re really appreciative that Christie was willing to work with on this,” concluded Shulman, “and it has been working out really well. The movies were created in-house by a collection of our artists and there are plans for six more movies to be added.”

Paul Dumpel, sales manager, Christie, said the specific nature of this large-scale art project, based on the concept of a movie theater, was a compelling reason to support the project with the donation of the two projectors and lenses. “Christie’s visual technology will be on full view at the Renwick Gallery for the hundreds of thousands of visitors who annually come through the doors of the museum.”