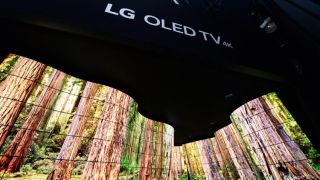 8K is not the big story from CES. It's a story, but 8K is the same story– the same evolution– for every display manufacturer. At CES 2018 two of the most important things that happened in the display realm of significance are: LG doubled down on OLED breakthroughs, and Samsung showed they can do “emissive” too. Revolution? It’s part of one– that we in the large screen video world are seeing in other quarters.

This week at CES LG showed a new OLED configuration with the display being “rolled up” in a case on the wall and then unrolling to form the display. LG’s OLED has a structure that lends itself to such flexibility– as shown in the demo of curved OLED panels. The winding 92-foot-long “LG OLED Canyon” at CES features 246 LG Open Frame OLED displays, in concave and convex configurations.

LG is all in with OLED, and OLEDs beauty rests a lot on the emissive nature of the technology. With OLED, there is no backlight. The pixels are the light source, because it’s a high resolution, emissive technology, so the result is a deeper black capability, and better color saturation because LCD crystals are not filtering the light source and weakening color and polluting deep blacks. And while this property– the emissive nature of the pixels – accounts for the image quality it also allows each pixel to be mounted directly onto the display substrate without the need for glass to hold it all together. That means that OLED Displays are able to flex to a concave or convex curve for example. And this week at CES LG showed a new OLED configuration with the display being “rolled up” in a case on the wall and then unrolling to form the display (sound familiar?... like projection screens that roll up or down from an enclosure and then roll back up to hide).

Over the past couple of years, this emissive nature of OLED was its strength, and it’s in full display at CES (from LG, and from a few other brands who source the OLED from LG). LG has been making the statement that Samsung’s QLED technology is not a self-light-emitting device and really is LCD in a different flavor. At CES 2018 Samsung is showing QLED, which is evolving and improving. But there’s more buzz at CES for the Micro-LED based TV that Samsung unveiled. Sony showed a similar product a few years ago for the consumer market but it never really took off. It is interesting that Sony’s more recent foray into micro LED, with its Canvas Crystal LED display, is more telling of what’s going on: the Sony technology, Crystal Light Emitting Diode Integrated Structure (CLEDIS), uses ultrafine LEDs in a unique surface mounting structure as its light source. Bingo– we’re back to emissive vs. transmissive displays. Micro LED, as a trend here, is as significant a trend as is fine pitch LED in the AV market: the move to LED pixel pitch below 3mm and down to less then 1mm even. Just as this fine pixel pitch trend in direct view LED in large screen commercial AV (stadiums, arena, concerts, corporate lobbies, high res video walls, etc) is moving the market, so is micro LED now shaking up other markets. Even cinema has been flirting with micro LED, to replace projection– a small trend so far, but getting some interest, and in fact Samsung is the only manufacturer offering a DCI-compliant LED Cinema Screen to the market (and Samsung pairing its Cinema LED Screen with audio technologies from JBL by Harman– now of course owned by Samsung).

Beyond display trends at CES, the rumble of tech giants’ footsteps into the 2018 landscape is impressive. Highlights from my perspective– with unknown, at this point, implications for other segments:

To a lot of speculation here, Samsung bought Harman for $8 billion in March 2017– and many in the pro AV world wondered how this was going to play out. It’s too new to have brought dramatic changes to either Samsung or Harman on the pro side, but it’s playing out in the area the pundits predicted last March: automotive. Remember that Harman products for the auto sector– that’s a much bigger market than pro audio or consumer audio. About 65% of Harman’s $7 billion of sales during the 12 months ended September 30, 2016 were on the auto technology side. And it’s not about “car audio”, not anymore. Telematics deals with the electronic functions of a car that are non-audio. We now call that part the “connected car” side. Samsung bought Harman for its strength in the telematics side of the car market. Then, last year, Samsung created a $300 million automotive innovation fund after the acquisition, to fuel product development. Samsung and Harman have unveiled a digital cockpit and a telematics solution at CES this week. Samsung also launched its DRVLINE platform for OEMs and MaaS providers in the autonomous driving space. DRVLINE is touted to be an open, modular, and scalable hardware and software platform that will allow vendors to collaborate and customize freely, instead of adopting a proprietary technology. According to Samsung it offers in-car processing and a new ADAS– Advanced Driver Assistance System– forward-facing camera system, designed with Harman. Samsung and Harman also unveiled a new Digital Cockpit platform that offers an in-car screen that can display vital vehicle information and features. It also has a premium, multi-display layout with Android powering four displays.

Samsung and Harman unveiled a new Digital Cockpit platform that offers an in-car screen that can display vital vehicle information and features. It also has a premium, multi-display layout with Android powering four displays.

Samsung is of course in the Android camp, so that makes the Samsung – Harman – Google dynamics interesting. Will Samsung leverage things to bring the same kinds of voice assistant technologies to home devices and to your car? Now that would be something. Which leads us to:

Google vs. Amazon (Why should you care?)

In 2017 Google Assistant emerged as the first serious contender to Alexa– so CES 2018 is being seen as Google vs. Amazon for the “voice ecosystem” by some. Why is this important? Google Home, it’s being touted at CES, will be the company's best-selling hardware product. That’s saying a lot, since the Chromebook was and is a hugely successful product– largely fueled by the K-12 education market. Recent numbers from consulting firm Futuresource said Google was commanding 58 percent of U.S. K-12 school market for devices (tablets, netbooks, etc). Windows is in second with 22 percent and the combined MacOS and iOS are at 19 percent. Amazingly, just three years ago, Apple represented nearly half of devices being shipped to U.S. classrooms. So Google, supporting hardware that was cheap, won a big market battle vs. Apple and Microsoft in the classroom with an education console (marketed and branded by Dell, Samsung, Acer, HP, etc) very well received and that made it possible for IT administrators to manage profiles on individual devices or manage multiple students on one device.

What does that have to do with Google vs. Amazon now? Regardless of whether you think personal assistant tech or voice recognition is relevant to anything you do, the recent Chromebook development points to a Google ambitious to win in hardware markets– and not just sideways as with the Chromebook phenomenon but directly with a Google branded device. In addition, Google announced at CES that it has also has partnered with 15 companies (Altec Lansing, Anker Innovations, LG, Bang & Olufsen, Braven, iHome, JBL, Jensen, Lenovo, Klipsch, Knit Audio, Memorex, RIVA Audio, SōLIS, and Sony) to make smart speakers and appliances, including four devices that will have built-in screens. The devices with screens are not based on Android but instead on Google Things, the company’s software specifically built for in-home devices. And note that JBL, Lenovo, LG, and Sony are producing Google Assistant speakers attached to a screen– interesting.

Google, Amazon, Microsoft and Apple hope that the voice ecosystem devices are the next big platform. And it’s no surprise these devices give companies access to squillabytes of user data in the form of every command from the every user. That kind of data is at the heart of future AI products. The term AI (with or without the added verbiage about machine learning) is part of about every company and product press release today, in any technology industry. As we start 2018, the AI story is really about what giants Google, Facebook, Amazon, Microsoft and Apple are doing in this regard– building the best walled gardens of data they can. The many many companies touting AI at CES are mainly a distraction, with their robots or kitchen appliances. AI will come to the rest of the world, but the Google/Amazon/Apple battles have to play out first.