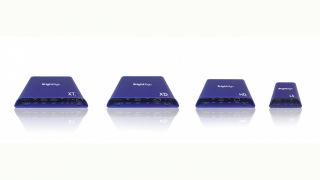 The weeks leading up to Labor Day are not exactly laden with new product introductions in this industry. (Are they, in any industry?) So it was refreshing to have a pretty heavy player in the digital signage industry weigh in last week, in personal press briefings– with an impressive revamp of pretty much their entire lineup of media players (and that from a company that was not behind in any technology race I know of). In fact BrightSign has been at the forefront for a while. If that sounds like press release-speak, apologies, but BrightSign did come out with the first real 4K digital signage media player (a few years back), and you’ll see there devices not just out in the field but in many of the big display manufacturer and display distributors’ booths at InfoComm and Digital Signage Expo.

In a private briefing on the week before Labor Day, BrightSign’s CEO Jeff Hastings explained how his company has always tried to do things differently–not just take Intel mother boards and create PC-based media players for digital signage, but provide a more complete solution. When I asked Hastings how it today’s landscape were there are so many media players, and where so many now even claim to do 4K, how can the novice user tell them apart?

“A lot of people claim a lot of things”, said Hasting. “But you need to test those devices– very few meet the specs they claim. For 4K for example, some do 4K with HDMI 1.4 not 2.0. And most are consumer class devices, not commercial grade. Remember, in the cost of ownership of a digital signage network, a lot of the cost is the ongoing maintenance including labor costs. So you really need to look at TCO, look at the failure rate of devices. Labor costs on replacing media players that fail will eat up budget very fast."

Of course, robust build is not readily apparent in the specs of a product. That can only be discerned in the field or from reputation and word of mouth. But even beyond that kind of good reputation and track record, great specs stand out for some media player manufacturers, and BrightSign is up there. Without going over BrightSign’s milestones over the past few years, cut to the chase as we roll into falling leaves, the MLB playoffs, and (thank god) football season. BrightSign has some serious news on the product front, doing total solution– not just hardware, bare bones device, but some sophisticated processing like doing HTML rendering in the software. And now, HTML5 is supported by every player in their line. Also, H.265 decoding– necessary for 4K– but they are doing that in the other products as well. HDR ability now, not promises for the future, with 10bit color. All their players, less than an inch thick– tuck them right behind the screen (thin mounts for displays are all the rage, so you need thin media players).

Here’s the Press Release from BrightSign:

LOS GATOS, CA – (September 7, 2016) – BrightSign, LLC announced the first major overhaul of the company’s players in nearly two years. BrightSign’s lineup of digital signage media players has been completely redesigned and will ship with a portfolio of technology updates including an M.2 interface for Wi-Fi antennae or a solid-state drive (M.2 SSD). BrightSign’s free BrightAuthor software and the BrightSign Network are also updated with advanced digital signage features for enterprise-level performance.

“The digital signage marketplace is evolving rapidly. For that reason it’s important that our technology solutions not only support signage as it’s being used today, but that they also work flawlessly many years from now,” said Jeff Hastings, BrightSign’s CEO. “Customers can install our players today knowing that BrightSign software, hardware and networking solutions will serve them well in the future as they implement new and exciting digital signage features.”

BrightAuthor software v4.5 will enable a new feature on the HD, XD and XT players called Mosaic Mode, which allows a multitude of lower-resolution videos to be played in multiple video zones that add up to the total resolution decoding power of the player’s video decoder. CEA HDR 10 is supported on all players delivering a much higher contrast ratio and much wider color palette, complementing the higher resolution of 4K displays. And the ability to real-time encode and stream content from the player to another end-point or device is now incorporated in XD and XT players.

B-Deploy, a powerful new feature that allows customers to set up and deploy from tens to thousands of players all at once, can be used with the BrightSign Network, a BrightSign Partner CMS, or an on-premise secure corporate LAN with internet access.

BrightSign HD: Updated Classic with Mainstream Performance
BrightSign’s new HD models are updated with advanced technology that delivers power and performance for mainstream applications at a very affordable cost. Both the HD223 ($350) and HD1023 ($450) offer hardware-accelerated HTML5 engine and 1080p60 decode, along with BrightSign’s highly reliable media-handling platform and signature ease of use. All HD models support Gigabit Ethernet, as well as robust interactive controls and dynamic live content features.