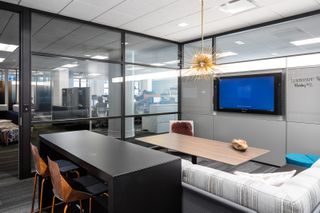 Last fall, collaboration technology developer Plantronics released a report that examined how noise affects productivity in the workplace. The study noted that workplaces are getting noisier, with more employees inhabiting fewer square feet of office space. Over half of the survey’s respondents said they were disturbed by noise multiple times daily; more than a third said that customers calling in complain about the noise they hear in the background during calls. Seventy-seven percent of those surveyed said that they would prefer to work in a “more traditional workspace with high walled cubicles or offices.” In other words, open-concept workspaces may look sexy, but people don’t like them that much.

That’s not to say that open office spaces—and the glass fish-tank conference rooms that go with—are going away. “With the price of real estate, I don’t think [organizations] have a choice; they need to fit more employees into smaller spaces,” said Joey D’Angelo, consultant and founder of Joseph D’Angelo and Associates (DNA). “‘Densification’ is the term for it in the architectural and facilities groups among the companies that we work with.”

The question is: how can acoustical consultants and AV design and integration firms succeed at selling the importance of acoustics to clients that place more emphasis on aesthetics and less on making sure people can hear each other properly?

“Whenever I get a client that’s not so concerned with acoustics, [it may mean] that they just may not understand how it could benefit them, or what could happen when it’s not working,” said Robert Alvarado, principal and office director of the San Francisco location of Shen Milsom & Wilke LLC (SM&W).

Sometimes this requires leaning on past projects that the client may not be happy with because they didn’t follow acoustical recommendations. He cites one of his own clients as an example: “We did their first building and they took a lot of the recommendations, but many of those recommendations were never implemented correctly. The next go-round, it was interesting to see that they were really focused on acoustics, almost to the point of over-analyzing it and putting in as much as they could because of what happened in the past.”

Dick Tollberg, senior design engineer at AVI-SPL, says that real-world examples are among the most effective ways to illustrate the impact acoustics can have on a space. “I think that a lot of laymen do not understand just how much sound reaches them from the walls, the ceilings, the floors, the tables, compared to the direct sound that comes from the speaker,” he said. When AV firms can get into projects during the initial design phases, “taking the client into a room that is correctly done acoustically—both from the absorption that’s required, as well as ensuring that the ambient noise level is acceptable—and showing them the difference between that and the typical conference room makes great strides in helping them understand how much of a better experience they could have with a conference room that was acoustically well-designed.”

D’Angelo acknowledges that AV firms can’t force clients to execute their recommendations, but he does believe that the AV community can arrive at solutions that will at least improve the acoustical behavior of a space. For example, he cites angling walls six degrees from being parallel, or treating one wall with fabric-wrap panels, or installing acoustic ceiling tiles as several of the options available. He also notes that glass doors should be outfitted with gaskets to prevent sound from spilling out of the space, and that walls should run deck-to-deck. “On the other side of the coin, the audio processors are so powerful these days that we can deal with some pretty [poorly behaved] environments electronically as well, to a certain extent,” he said.

One of the biggest challenges AV firms continue to face is when they’re brought on board: Tollberg relays that more often than not, room designs are established before acoustics and AV are even considered. “They’ve been looking at the room [design] for weeks or months, they like all the glass, they like all of the other attributes, and we come in and say, ‘you know, there are some problems acoustically that are going to affect the quality of your audio,’ and they don’t understand,” he said. While he, too, concedes that audio processing can compensate for this, he also notes that there are limitations to what it can achieve. “If the room acoustics have been dealt with before the AV technology goes in, the AV technology works much better, is easier to set up, and the experience that the listener outside of the room gets from the system is much more pleasant.”

That said, according to Alvarado, some organizations are starting to pay more attention to acoustics. He believes this is linked to companies’ efforts to maintain—and boost—employee retention through providing healthy environments in which to work. “If you can differentiate yourself from another company [by creating] better conditions, you have better, happier, more long-term employees.”

Thinking Outside the Fish Tank

While almost every organization has remote workers in some shape or form, very often this part of the workforce is forgotten in conference room design. Dick Tollberg, senior design engineer at AVI-SPL, notes that it’s important to design acoustics that take remote meeting participants into account.

“Many times, people do not understand the difference between being in a room versus being in a remote location apart from the conference, and trying to hear what’s going on clearly in the conference itself,” he said.

When you’re in a meeting on site, you benefit from not only being close to the speaker––you can also take advantage of visual aids, such as gestures. “When you’re remote and you’re just listening and you don’t have the visual feedback, if the room is marginal acoustically, it becomes very, very difficult to understand what is being said. In order to understand you have to really concentrate, and as people have to concentrate like that, they don’t necessarily assimilate the same amount of information—they have a harder time retaining it, versus someone who can easily hear what is going on. A lot of people don’t [consider] that when they’re thinking about the design of these rooms.”