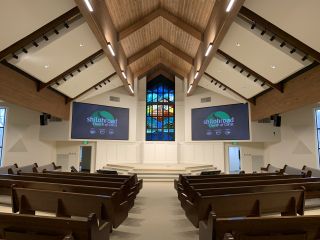 Shiloh Road Church of Christ in Tyler, TX, emphasizes parishioners and not property. The words “A church isn’t a building, it’s the people” are featured prominently on its website. But the needs of the building were recently addressed when the organization decided to remodel its sanctuary, which had been built in the 1970s.

Sunday Haus, a house of worship-focused construction firm in Weatherford, TX, was chosen as the general contractor for the project—the company built the original sanctuary some 40-plus years ago and has completed many projects for the church since. The team at Sunday Haus had worked on several developments with AVIXA APEx-designated integrator Electro Acoustics and previous clients had been impressed with their work together. Bob Schumacher, owner of Sunday Haus, turned to Chris Jordan, CTS, president and chief steward, Electro Acoustics, for the AV side of the project at Shiloh Road.

“The client wanted to remodel the sanctuary to have a more modern look, feel, and technology system—not only a technology makeover but an entire room makeover,” said Jordan.

As part of the AV upgrade, the church wanted to ensure worshippers could not only hear the music, but could see it. Shiloh Road is an a cappella congregation and its members sing multiple harmonies during worship. The building needed a video system that was “large enough and high enough resolution” to display musical notes as well as lyrics. The system would also need to be able to broadcast videos during baptisms and, at other times, showcase announcements.

One of the most significant challenges in designing this AV system was accommodating a large stained glass window in the sanctuary. The window was “stunning,” according to Jordan, but its beauty was obscured by an old speaker/screen/air duct chase. The obstruction had to go, but its removal would lead to more ambient lighting in the room. To add to the challenge, the side walls of the sanctuary include clear glass windows, further increasing the ambient lighting.

As visual options were discussed, Jordan and his team saw that video walls were the most obvious solution for the space. Because of their ability to showcase high-brightness, high-contrast images with deep color saturation, the team chose Absen 4mm LED displays for the installation.

“We are delighted to be helping Shiloh Road Church of Christ deliver their gospel messages through our latest LED solutions,” said Alison Maxson, senior manager, marketing and communications, Absen. “With the ever-growing demand for LED, especially over projection, in today’s house of worship market, we strive to ensure our integrator partners—like Electro Acoustics—know the latest in LED technologies to empower them in such installation projects.”

Content for the displays is created and showcased through Renewed Vision ProPresenter on a Mac computer. Videos presented during baptisms are switched using an Extron IN1608 xi scaling presentation switcher.

While the LED video walls were an “essential element of the success of the room,” says Jordan, “much work was done to improve the room’s acoustics and enhance the [congregation’s] a cappella signing.” The team planned diffusion for the rear walls to reflect the congregants’ voices back into the room, creating a sense of unity while preventing potential echoes.

The Electro Acoustics team installed two d&b audiotechnik Yi10P loudspeakers, along with four d&b E6 loudspeakers and two 8S loudspeakers for delays. A d&b 27s cardioid subwoofer was selected for its ability to “provide rich low-end to the congregation while limiting the amount of energy on stage,” added Jordan. “The quality of spoken word and congregational singing was of utmost importance, so d&b was an easy choice because of their ability to reproduce clear, natural sound evenly to the entire room.”

In addition, the sanctuary ceiling was upgraded with “acoustically white reflective clouds instead of dark wood,” said Jordan. “Not only did this update result in a more pleasing room to sing in, but it also reflected the natural light from the room. The room is so much brighter, naturally lit, and cheerful. It is a remarkable improvement.”

“There is a huge difference between designing LED video walls and technology systems in a pristine architectural environment compared to the typical ‘rock concert’ type of environment,” concluded Jordan. “At Electro Acoustics, we are experts at this, and that is why this project was such a success.”

Hear more from Chris Jordan on the intersection of AV and architecture at the April 18 AV/IT Summit in Arlington, TX. Click here to learn more.