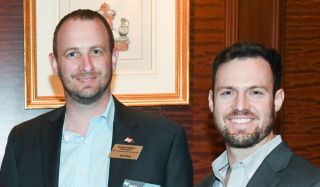 It all began with an e-mail. Jeremy Caldera, CTS-D, CTS-I, CEO of IAS Technology, opened his inbox one day and saw AVIXA’s (then InfoComm’s) call for volunteers. He answered, and began teaching courses at the InfoComm show and contributing to the CTS exam.

“I enjoyed those things so much, and the idea of giving back to the industry and the association in other ways was very appealing to me,” recalled Caldera. After asking a friend about being further involved in the association, Caldera was introduced to Chuck Espinoza, CTS-D, CTS-I, AVIXA’s senior staff instructor.

“Chuck was able to give me guidance on what the CTS steering committee was all about, and encouraged me to run for the position,” said Caldera, who was “honored” to be elected representing CTS-D holders later that year as a member of AVIXA’s certification committee.

Caldera was quickly elected chair of the council. With a relatively naïve viewpoint coming from a small Midwestern integrator, Caldera dived into the global world of AVIXA to champion the CTS program—which he counts as his largest challenge in his time on the council. “I asked myself how I could be a champion for a program that spanned across the globe,” he said. “That was the start of several years of continual network and volunteering anywhere and everywhere I could find the opportunity.”

The networking and volunteering paid off as Caldera said they have “seen growth of over 20 percent in total certified individuals with expansion in a larger number of countries across the world” during his time leading the council.

“I have made some of greatest connections and friendships with people from Australia, India, Europe, South America, and all over the United States, all while discussing the importance of certification and standards within our approximately 100-billion-dollar audiovisual industry,” he added.

One such friendship formed was with Luke Jordan, CTS-I, account manager, Electro Acoustics. The two first met in 2016 when Caldera won his second AVIXA award—Educator of the Year—and Jordan won his first AVIXA award—CTS Holder of the Year. They hit it off immediately because, like Caldera, Jordan is a go-getter, people person, and passionate AV evangelist. Caldera and Jordan have both been honored with AVIXA’s Young AV Professional—Caldera in 2015 and Jordan in 2018—and both spend a significant amount of time volunteering for AVIXA.

Jordan began offering his time to the association by chairing its Integrators Council, and quickly integrated himself into the inner workings of the industry. In late 2018, he was elected to the certification committee—and elected by his peers to chair the committee during his first term. Jordan, who is still “pinching” himself over this, said “Certifications have been such a driving force for quality, efficiency, and pride for me and my company, and the opportunity to serve on the committee is thrilling. I believe my passion for others’ success, my story of how certifications have changed the trajectory of folks at my company and industry, and my desire to give back to a community of driven folks all tie into the decision to elect me as chair.”

“I am excited to pass the torch over to Luke—there are very few individuals in this industry with such drive, passion, desire to better others, and a giving nature,” said Caldera. “He is certainly one of those individuals and I am honored to call him my friend. Seeing him elected to this prestigious position in the association has made me proud, and I know the committee will blossom under his direction.”

Caldera and Jordan were quick to point out that they couldn’t lead without the dedicated council supporting them every step of the way. They both stated that they are grateful to work with a “highly-regarded team of individual who come together for the betterment of furthering the industry through education and common standards.”

Jordan plans to continue Caldera’s work of celebrating AV achievements. Caldera personally e-mailed or called many of the individuals around the world who achieved CTS certification during his tenure as chair. “Achieving a certification is a big deal! When a person decides that, in order to achieve his goals, he needs more education and training, and then makes it happen, something inside him changes,” said Jordan.

“I want to highlight the individuals making this transition, encourage anyone who is on the fence about getting certified to make the leap, and of course celebrate wildly when they walk out of the test fist pumping,” he added.

Caldera will be there behind the scenes celebrating with Jordan as they continue their friendship and working relationship. “I consider Jeremy to be a great and positive force in our industry—I see him as a peer, friend, and role model, and I look forward to building onto the great work he’s produced with the Certification Steering Committee,” said Jordan.

“With Luke in place, I know CTS holders will have their best interests represented for years to come,” concluded Caldera. “The only advice I can give him is to network and connect with as many people as possible. Rely on the subcommittees and simply represent the best interests of the individuals you were elected to serve.”