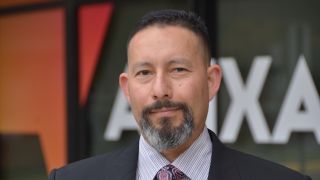 There are countless differences between military and civilian life, but one in particular was vexing for Chuck Espinoza as he transitioned to work outside of the Marine Corps: an absence of instructional material.

“In the military there’s a manual for any job you have to do—standard operating procedure—and if you don’t know the job, you just read the manual and you can just pick it up,” he said. “And I found out that being an AV tech that there was no real manual at the time.”

As it turns out, that was fortunate. This dearth of documentation spurred him on a course of action that became his calling: an educator, paving a path to success for others to follow.

A trombone player who also played guitar and bass in a rock band in the Marine Corps, Espinoza found the quality of the live sound mixing services provided by untrained fellow musicians unacceptable, and took matters into his own hands. With his experience operating consoles in high school, he transformed the sound quality of his and his peers’ bands, and quickly became the “sound guy” for his division, which included developing and teaching a curriculum on sound engineering.

“It was around then I started thinking ‘I want to be a sound guy,’” he recalled. “But when you’re in the military, you’re really focused on what you’re doing now, and not too much on what you’re doing later.” Still, become a sound guy he did, and worked for some time running his own LLC as a sound engineer after leaving the service. Eventually, though, his wife encouraged him to find a more traditional job with benefits and conventional hours—and his career in AV began.

It was at this juncture that his unfamiliarity with the video and control side of AV led him on his search for education, and he found it in AVIXA (known as InfoComm at the time). He passed his CTS examination three months after starting as an AV tech; a little while later, he came back and took the CTS-I.

“I did so well on my CTS-I that I got asked to come back and adjudicate the test,” he said. “So I started more and more getting involved with InfoComm, adjudicating tests and grading. At this point in time, they were working on a book—a kind of how-to guide on tech—the kind of thing I’d been kind of looking for.”

He was asked to participate on the creation of the Installation Handbook, and he obliged. Later, about 2006, he became an exam writer for the CTS-I, and, around the same time, was elected to AVIXA’s certification steering committee, of which he subsequently chaired. “I had some things that I wanted to do as chair, more personalized student exams,” he said. “I talked to people every day who passed their exam and wanted to know how their experience was, how the testing center was, how the exam was prepared.”

Fast forward a few years, and Espinoza was working as a department director for an AV company as a teacher, while still volunteering with AVIXA, but was feeling a little disenchanted—working in an office all day and not connecting with many people. Then, Mel Girardin, AVIXA’s erstwhile director of training, reached out to ask if he’d like to become a staff instructor. Espinoza’s response? “Oh hell yes I would!”

He was promptly hired and began applying his personalized and scientific approach to pedagogy. For example, he researches his students ahead of time to figure out what kind of learner they are, and seats them accordingly—visual learners up front, auditory learners in the back. He also tries to structure classes such that his role is more of a facilitator than a lecturer, and the students drive discussion among themselves. “Then all I’m doing is just guiding this discussion along the right path of where it needs to go to satisfy the knowledge requirements,” he said.

Beyond his passion for teaching, he’s a devoted family man, spending as much time with his wife and four-year-old daughter as possible. He loves to cook—especially bacon—has a large gun collection, and loves to shoot and teach proper shooting techniques.

But as for his career, you can expect to find him imparting his enthusiasm on eager learners for generations to come. “I can honestly say that I will probably die in front of a classroom,” he said. “I will probably be here until I’m old and gray.”