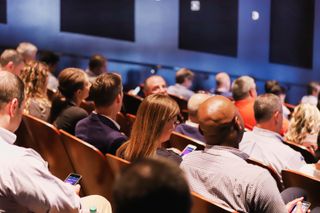 What passes for audience engagement at your average mega-conference often looks only slightly more exciting than an airport security queue.

We’ve all seen it: Attendees shuffle across a ballroom floor to a few microphones placed around the venue, then line up and wait for their turn to ask the panelists a question. Not only is it inefficient, but the setup can discourage timid people from sharing valuable insights.

And now that more than 75 percent of Americans today are walking around with a suitable communications device in their pocket, it’s also unnecessary.

Scroll through the gallery below to see the latest microphones for conferences and events.

Biamp’s Crowd Mics empowers audience interaction by turning smartphones into wireless microphones. CrowdMics comprises two apps—one for event attendees and the other for moderators—and a small, preconfigured hardware host device, the ATOM. The ATOM serves as the central connection point between the attendee and moderator apps and the room’s AV system.

Audix' M65 gooseneck microphone is finished in a black nickel plating and come with an 8-foot cable terminating in terminal block connectors.

“The most ubiquitous piece of hardware today is the smartphone,” said Joe Andrulis, executive vice president, corporate development at Biamp. “People are not only comfortable using a mobile device, they’re also savvy and literate about how far those capabilities extend to meeting their needs. In the event space, we’re capitalizing on that familiarity with our Crowd Mics solution.”

The Crowd Mics system allows up to 1,000 audience members to communicate directly with presenters or moderators without leaving their seats. If someone wants to ask a question, they can raise a virtual hand through the app. Moderators can open the floor to audience members in the queue to speak by pressing a button in the app, or allow attendees to text their questions.

“A moderator or presenter doesn’t have to look out into the audience and see who has their hand raised,” said Andrulis. “It streamlines event management, so the focus is on what truly matters: the interaction.”

[3 Key Insights From The World Premiere Of Crowd Mics]

“Nowadays there is an expectation to have an elevated degree of interaction between presenters and audience members. However, it’s exceedingly difficult to deliver an expertly moderated event that adds excitement and value for the audience using traditional microphone technology.”

Options like strategically placing multiple stand-mounted microphones or passing a wireless mic when an audience member wants to speak, he said, “are not only time-consuming but also awkward. Additionally, audience members might be unfamiliar with or fear using a mic, which often results in moderators struggling to hear them.”

The app-based Crowd Mics concept also keeps traditional hardware microphones out of sight and out of mind at conferences and events. Other manufacturers are following that trend in smaller footprints and finding that the best way to go is up.

“Manufacturers [are] looking at the best way to capture speech without drawing attention to the solution,” said David Marsh, director of sales at Audix. “Our M70W ceiling microphone is able to provide the customer with a very sensitive microphone that blends into the room environment, which is the best of both worlds.”

The M70 uses the company’s Micros series technology, designed to deliver high sensitivity and low noise. With a footprint of 3 inches in diameter, the M70 can be installed as a flush-mount ceiling microphone to capture speech without drawing attention from the main event. The ability to aim the element up to 45 degrees makes it flexible for installations.

Shure recently commissioned a study by tech research firm Illuminas that found two-thirds of business conferencing users named audio as the most crucial contributor to meeting success. Participants in the study reported hearing the phrase, “Can you hear me?” in most or all virtual meetings.

“In professional conference spaces and events, the default solution is to place microphones on the meeting table, and these solutions are often adequate,” noted Chris Merrick, global marketing director, integrated systems at Shure. “That said, there are other options to consider for better audio quality. Where applicable, integrators are considering ceiling arrays more and more.”

With Shure’s MXA910 ceiling array microphone, the conference room mic is located overhead, out of the way and virtually out of sight. The latest version incorporates IntelliMix DSP, a collection of processing features that includes acoustic echo cancellation, noise reduction, and auto mixing.

“Solutions like this provide the tools needed to deploy a room standard at scale—whether it’s hundreds of rooms with a small AV footprint or tens of rooms with a huge AV footprint—all across multiple locations,” said Merrick. “Management at scale allows teams to better understand where they need to proactively address issues and respond to them remotely.”

Despite these innovations, there are still plenty of applications where a desktop-mounted microphone is the best audio solution.

When the New York State Assembly in Albany recently began renovations to update its voting machines, which are stationed at each delegate’s desk on the Assembly floor, modernizing the audio system was also a top priority.

Since the delegates stand when addressing the Assembly, the client needed something unique and low profile. They quickly ruled out pull-up style and gooseneck microphones with retractors, citing past failures. Audix stepped in to help and developed the M65 microphone.

With its rigid-tube design and slim profile, the M65 accomplishes the two main objectives of the project: to source a durable, dependable microphone that wouldn’t distract visually or get in the way of the 170 lawmakers who use them. But the Audix team took it a step further.

“To integrate the M65 with the voting consoles, we designed a socket swivel that allows for fluid, quiet, and consistent 240-degree rotation with a 40-degree pivot.”

Now when Assembly members stand to speak, they simply raise the microphone on its swivel. When they’re done, they lower it quietly back to its resting position, flush with the desktop voting machine.

There are some installations where integrators aren’t allowed to drill holes or disturb the physical structure due to historical significance, or where hard-wired microphones simply aren’t efficient.

“Today’s government and corporate offices, hotels, and education centers—even those with architectural significance where drilling holes isn’t an option—are increasingly being asked to act as multi-use spaces,” said Merrick.

“Integrators and technology managers are in search of dependable wireless audio solutions that can meet the constantly changing demands of 21st-century meetings without being sidetracked by the harsh realities of meeting venues.”

Neutralizing audio issues before they can sideline a conference or event is possible thanks to the continued partnerships among clients, integrators, and vendors.

“Companies put forth extensive resources for lighting, seating, and displays,” Merrick added, “but none of that really matters if attendees can’t hear one another, or if a presentation is disrupted due to audio issues.”