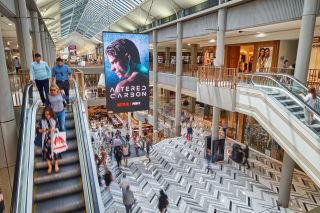 According to research firm Markets and Markets, the digital out-of-home market will be worth $26.21 billion by 2023. Retail and hospitality are the main players in this commercial vertical, and the firm predicts that North America will dominate this market due to its early adoption of the latest display technology.

But while digital signage is about displays, it’s not all about displays. “If you’re in the business of digital signage, you are now a digital experience designer,” said Laura Davis-Taylor, co-founder of The HighStreet Collective, a retail experience design firm based in Atlanta, GA. She noted that when she and HighStreet co-founder Ed King began working with digital signage 20 years ago, the focus was on delivering the right message to the right audience at the right time. “That has moved on, and a lot of that is because of the influence of Amazon and other cultural and technological factors.” Today, retailers are using digital signage as a measurement platform to determine, in a retail environment for example, how many people circulate through a store, what parts of the store they visited, and how long they spent there—the same type of data that can be gleaned from the back end of most commercial websites.

These expanded capabilities can lead to trouble, however, cautioned Brice McPheeters, director, customer experience at digital signage manufacturer NanoLumens, headquartered in Peachtree Corners, GA. “More often that not, we see executions where people go swinging for the fences right out of the box, and the problem is once you get into that, you start going, ‘What if it does this? I would have rather measured this,’” he illustrated. “Then you have to work backward and your initial investment is blown out the window, or you’re asking for additional investment to continue to build.” He suggested that a better approach is defining clear long-term goals for the technology and implementing features in phases. “It’s a matter of understanding what you want to achieve and then working backward from that, and doing it in pieces.”

At Tightrope Media Systems, a developer of software-based, web-centric digital signage management solutions headquartered in Minneapolis, MN, the company’s president, Eric Henry, noted that a primary concern for the tech managers he interacts with is efficiency. “[Today,] everybody can pretty much do all of the technical things that are required to make something look good on the screen,” he said. “The shift is toward placing more and more screens within our facilities. How can we effectively manage all of the content, and the people contributing the content, in a way that’s useful without having to hire people—both on the content creation side as well as the administrative side?” Systems that can be managed from a central location, remotely, help to lift some of the workload involved in making all of the related devices communicate with one another.

To many techies, augmented reality promises to boost digital signage interactions; however, McPheeters doesn’t believe it’s ready for prime time yet. “The [implementations] that really take off are super-targeted, super-custom, one-off PR-type exhibitions,” he said, citing Pepsi’s campaign that transformed one side of a London bus shelter into a window that reproduced an image of the street, where there appeared to be flying saucers, a robot on a rampage, and a tiger on the loose. “That’s not something you’re going to put in 1,000 stores across five brands; it’s going to be very specific. I think it’s like anything: when it’s implemented tastefully, it’s very, very effective. But it’s also very easy to become gimmicky.”

It also comes down to whether people—en masse—are ready to interact with AR, King argued. “It’s not necessarily how good the tech is or how interesting the tech is, or if it’s actually to the point where it works consistently,” he said. “It’s: Will it fit into the lives, habits, and behaviors of today’s shopper? Yes, there are beacons, AR, VR, RFID—every day that goes by they’re becoming a little bit more accepted and acceptable in a retail environment, but not necessarily at critical mass yet.” What organizations need to examine is whether or not their target audiences will welcome these technologies, and if these deployments show potential when it comes to achieving business goals, such as increasing sales, engagement, and brand loyalty.

While Henry believes that AR will be more prevalent in retail—initially at least—he does see its potential in wayfinding applications in corporate and higher education campuses as well. “There are some pretty practical ways of using AR that I think will show up in the wayfinding experience, similar to Google Street View: now I can see where I’m going, and what it’s going to look like when I get there,” he said.

One series of technologies that is facilitating digital signage deployments is IoT devices. McPheeters pointed out that members of this product category have become less protectionist with their platforms, which has resulted in more interconnectivity. “In years past what you had was a bunch of segmented items and companies that stayed in their lane and didn’t open their platforms to communicate interdependently, [and] what’s started to happen is a lot of people are more open to working with even competitive products simply because of what you can do,” he said. “If you have a network of, let’s say, bus shelters across New York, being able to capture data and understand data across them allows you to provide a more cohesive and targeted experience. It’s really opening up operators’ abilities to become much, much more effective in what they’re doing.”

While technology is in constant flux, King stressed that people’s desires remain consistent—something to keep in mind when deploying digital experiences. “[People] want to feel good, they want to have social interactions inside stores, they want to have physical interactions inside stores,” he said. “I think people look at technology and IT and flat panels and digital signage as a one-way street. It’s got to be a two-way street; it’s got to be a conversation. Any way you can use gesture or voice or anything to have a back-and-forth is going to be the way forward for digital inside retail.”