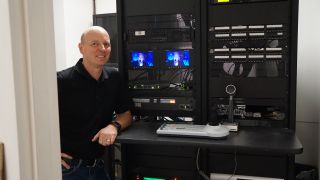 Long before NBC’s The Office made Scranton a lovable character, the historic city in Pennsylvania’s northeast corner has been an important voice in the nation’s narrative. With roots as an anthracite coal king, the city continues to lead the Commonwealth with innovative programs in the arts, culture, science, and healthcare.

The University of Scranton is one of the city’s educational leaders that honors its prestigious legacy while keeping an eye to the future, and collaborative technologies help set the institution apart. As the media and control system engineer of The University of Scranton, Robert Kennedy, CTS designs the touchpanels of the school’s control systems and supports audiovisual technology in nearly 200 classrooms. He also works on AV system implementation, collaborating with outside integrators when necessary. Kennedy has also found a unique way to meld his passion for emerging technologies with his deep expertise in audiovisual engineering. That method is artificial intelligence (AI), specifically an Alexa Classroom Control skill that he wrote for use with Extron Pro series processors and touchpanels. The Alexa Classroom Control skill and the Extron Global Scripter Alexa Module are still in beta, but the timing of this project couldn’t be better. AI and cognitive technologies are poised to shape the future of classroom and enterprise-grade AV.

Kennedy recognizes the growing importance of AV over IP and explained that The University of Scranton utilizes networked projectors. “We keep the AV feeds localized. In the future, we may distribute video over IP from the switcher to the projector, but currently we’re using HDBaseT for that purpose,” he said. “So, it doesn’t negatively impact our network bandwidth.”

As for video over IP, Kennedy sees the potential. The hope is to begin utilizing this technology as the network infrastructure evolves and bandwidth increases. But, he said, “We’re not there yet. The technology is still evolving and security concerns need to be addressed.” He is concentrating on switchers with HDBaseT outputs.

SKILL UP WITH ALEXA

As with many notable projects, Kennedy’s Alexa Classroom initiative began in his home office. “It is a personal project that I’ve been working on over these past 18 months at home,” he said. “I probably rewrote the codes 10 times, so it was a process.” Eventually, he got it working, and once it was operational, he presented it to the university with a request: “Can we beta test this and see what we can do with it?” The university agreed.

“I’ve done alpha testing in all the buildings to present a proof of concept that I can get it working,” Kennedy added. Currently, he and the team are discussing methods for the pilot to make sure everything is transparent and above board. A key element of this stage is working out security issues with The University of Scranton’s IT department.

“What we don’t want to do is initiate a pilot launch and fail,” he said. The Alexa Classroom pilot would indeed be a project too big to fail, so, Kennedy assured, “we want to make sure everybody and everything is protected in this and that it launches successfully. Our current mission is to have our pilot take place over this summer and next semester, where we have select faculty on campus actually use it.” During this critical phase, he and the team will request and analyze feedback from users.

AI: THE NEXT FRONTIER

While connected digital devices and digital assistants are rapidly growing in popularity, opinions vary on AI. How much is too much? Aren’t we already too closely tracked and monitored by Google and other Silicon Valley companies?

Kennedy acknowledges that there are often two types of feedback when the topic of AI is broached. “There’s the nervous feedback, and there are the people that love it,” he said. His personal experience with younger generations is that they have zero hesitation about AI or new technologies. “They love technology. They have embraced it fully, and they want it all ‘smart.’”

For the hesitant users, education and training can help alleviate concerns. The design also would make Alexa in the classroom optional. “The beauty of the Alexa skill is that you don’t have to use it if you don’t want. You can use the touchpanel.”

Kennedy confirmed that the AV team is not removing touchpanels from the campus. Alexa would be “just another piece that operates the Extron processor that controls the classroom equipment.”

At the heart of it, AI for classroom designs has “amazing promise,” according to Kennedy. “[It offers] the ability to streamline functions for faculty, so that the faculty don’t even have to think about control. With artificial intelligence, you’re able to get quick answers that don’t have to be calculated out.”

AI FOR ADA COMPLIANCE AND COLLABORATION

Kennedy is also excited about integrating AI and AV for ADA (Americans with Disabilities Act) compliance, as voice activation supports users with limited mobility. He also wants to leverage AI’s collaborative potential. “Imagine faculty having the freedom to move about in active learning spaces while maintaining the ability to share student content from one team with the entire class by using a simple voice command from anywhere in the room. Imagine faculty and students with disabilities having the ability to operate classroom technology without the need of specialized assistive devices. I think it’s an amazing opportunity.”

As the Alexa Classroom skill is in beta, Kennedy is developing best practices. “That is why, with this particular program, I had to redo it from scratch a few times, because I learned the best practice as I went.”

He is committed to breaking down the skill in detail so that when the Alexa piece is done, there is a module to drag into an Extron processor to link all commands. That would eliminate the need to do coding at that level.

Ultimately, Kennedy is optimistic that the industry will be receptive to an innovation of this ilk for classroom AV. “I’ve been able to streamline it to where it’s a very usable skill and easily incorporated into Exton’s Global Scripter for Pro Series control systems. I’m hoping to get more institutions that are willing to help me pilot it. They can tell me what’s missing.” He also proffered another request: “One of the things I could use is, actually, an expert in Amazon’s Web Services (AWS)” for cloud computing services.

Just like at The University of Scranton, for Robert Kennedy, the learning never stops.

“AI promises to be the most disruptive class of technologies during the next 10 years due to advances in computational power, volume, velocity and variety of data, as well as advances in deep neural networks (DNNs),” said John-David Lovelock, research vice president at Gartner. “One of the biggest aggregate sources for AI-enhanced products and services acquired by enterprises between 2017 and 2022 will be niche solutions that address one need very well. Business executives will drive investment in these products, sourced from thousands of narrowly focused, specialist suppliers with specific AI-enhanced applications.” Courtesy of Gartner.com